Study: The Average SF Wedding Costs $45 K, Which, What? 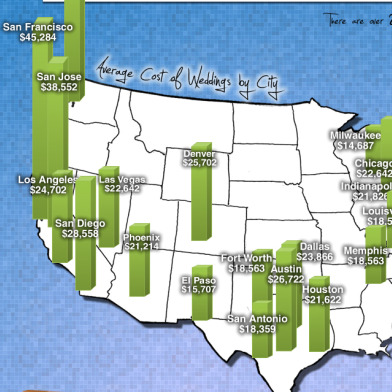 Consumerist directs us to this infographic from bridepop, which says that folks who get married in SF spend more than people in the rest of the country, with an average price (this includes the rings, if you care) of $45,284.

That is the average. I am stunned by this! Do I just have the wrong friends, and the even wronger husband? What goes on in these “average” $45K weddings?

Of course, I’m dying to know what makes an SF wedding cost so much more than one in Phoenix (avg: $21K) or Philly (nearly $17K). So I contacted two prominent local wedding planners to see what we’re spending our money on.

The first told me “I do not discuss money” (inspiring a friend to quip “prolly cuz most of it goes to her”), and the second said he could not speak on record, but that “a lot of brides have something to prove.”

Readers, have any of you attended a SF wedding that you suspect cost more than some college educations? If so, let’s hear the scoop. Were they worth it? And when the gays all start getting married (which they will, eventually, we gotta believe), will this bring our average up or down?