See Spot Write: Are You Fucking Kidding Me?

From what I can gather, Chris’ promise to drop the f-bomb was a little joke in response to the Guardian, who said his New Years resolution should be to clean up his potty mouth. So Chris is like, “Fuck you, I’m swearing forever!” to which we all go “Duh” and get on with our lives.

But no! We can’t! Because this is news!

I’m offended that Chris Daly swearing is headline news. What’s next? Traffic sucks? Poo Smells?I can’t help but delight when the weirdness comes out. Chris Daly saying fuck? That’s nothing. Has there been a Board meeting Supervisor Daly’s attended where he did not use the word? The guy walks around flailing his arms, talking at you (okay, me) nose to nose screaming about hobos and buses. It’s part of the Daly vibe. Will he ever be President of the United States. Uh, no. But crazy people who can get shit done can get elected to the San Francisco Board of Supervisors.

Actually, crazy people who are just plain crazy can get elected to the San Francisco Board of Supervisors. Gus Van Sant made a whole movie about it.

Anyway, I don’t think Chris promising to swear in Board Meetings is any big deal. The big (wonderful awesome, entertaining) deal to me is the serious, suddenly appalled response. 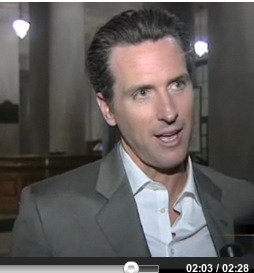 Personally, the new look is a little Mafioso meets Dennis Farina for me, but I’m just delighted the Mayor is expanding his wardrobe. Interestingly, Gavin is wearing THE VERY SAME OUTFIT CHRIS WORE TO MAKE HIS FUCKING PROMISE!!!

Look at the video. They’re in matching outfits, you guys. They might as well be wearing “Property of Alcatraz” sweatsuits and walking around Fisherman’s Wharf holding hands.

The Mayor describes Supervisor Daly’s latest crazy talk as “petulant.” He then silently asks us to cue up THIS interview.

Gavin does make the valid point that Proposition F-Bomb makes San Francisco seem crazier than we already seem to the rest of the country. The elastic-waist jeans people don’t need any more reasons to think we’re nuts. But I like Board President David Chiu’s response.

Supervisor Chiu, who is seriously the most boring person ever to live, busted out the disapproving sense of humor on this one. He dropped a bar of soap off at Chris’ office.

Good for you, Supervisor. Whichever staffer came up with that one should get a raise. It’s funny, appropriate, says “petulant” without actually saying it…the bar of soap was a genius response.

This city’s got a little problem with taking everything so goddamn seriously, stopping at every turn to pause and wonder if there’s anything to be offended about, that something like Chris Daly promising to say fuck becomes “mainstream” news. I’m offended that Chris Daly swearing is headline news. What’s next? Traffic sucks? Poo Smells?

Big whoop. The only news here is that if Chris Daly is going to promise to swear in every meeting, he should be forced to come up with something more creative.