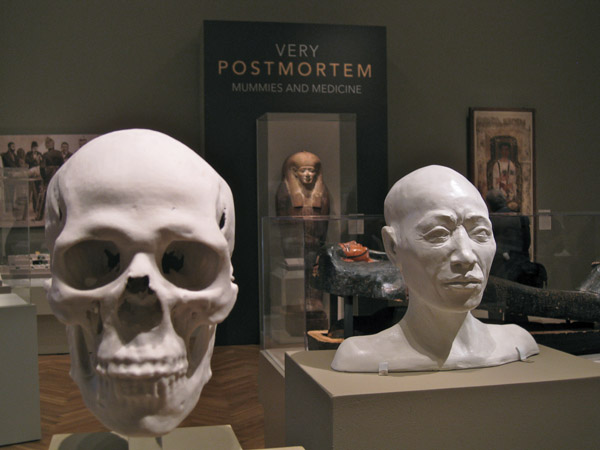 First, some context: I attended a press review of Very Postmortem, which opens on 10/31 at the Legion of Honor. A friend of mine who works at a prestigious private gallery in DC tells me these are regular things that museums do so the press can get the word out before the new exhibit opens to the general public. This is roughly equivalent to sending out an advance copy of a record to Rolling Stone so they can pretend to listen to it and then review whatever they hell they want while dropping references to the band’s older work. Ok, got it? it’s just like that except with mummies and not a new Black Crowes record or whatever.

Part of my problem with museums is their insistence on maintaining bankers hours. How am I, John Q. Public, supposed to make it to your museum between the hours of 10am and 6pm? Especially when it’s all the way out in the Richmond? This point is moot because I am not John Q. Public, I’m Andrew and I don’t really have a good excuse for not going to a museum on a Thursday morning. Especially when they’re letting me in for free and they’ll allow me to take flash photography for once.

So after arriving at the Legion of Honor, procuring my nametag, and scouting out the reception area, I’m handed a CD with a “3D flyby video” of a mummy and a sweet custom Legion of Honor/DeYoung USB Key. Do people collect USB keys yet? Can I sell this on eBay?

Also, they had coffee. Which was very thoughtful because I generally don’t leave the house before 10am and when I do, it’s to go find coffee. The coffee was good. I mean, it was hot, so that was good. It was no Blue Bottle, but as I understand it donations at these sorts of places are down and regardless it did the trick even if the cups were tiny and I had to drink two. In typical SF style there were several sugar options, but no soymilk for the vegans. Maybe vegans don’t like art? Or mummies? The wooden stirrers did seem a bit excessive, especially given the lilliputian coffee mugs. Maybe they could have used the sample-size spoons from Fro-Yo places. Those must be widely available at this point. I didn’t try the hot water or the decaf because I have no use for such trivial things.

Part of my problem with museums is their insistence on maintaining bankers hours. How am I, John Q. Public, supposed to make it to your museum between the hours of 10am and 6pm?They also had mummy-shaped cookies. I took two and then wondered if I looked greedy. And by this point I was carrying a whole load of crap: the presskit, two cameras (I borrowed a friend’s DSLR, for added professionalism), a plate of mummy-cookies, my phone, my girlfriend’s car keys that are far too bulky for a normal person’s pockets, and a tiny cup of coffee that I filled up too much because I didn’t want to make another trip. If nothing else, by now I just looked clumsy. But I did manage to find a seat near the back without spilling anything on the man playing the organ. Oh yeah, there was a man playing the organ. Like a big, full one. But where are the pipes? Are there organ pipes in the Legion of Honor or was this by magic/technology? Things like this occasionally interest me more than the anciently deceased. 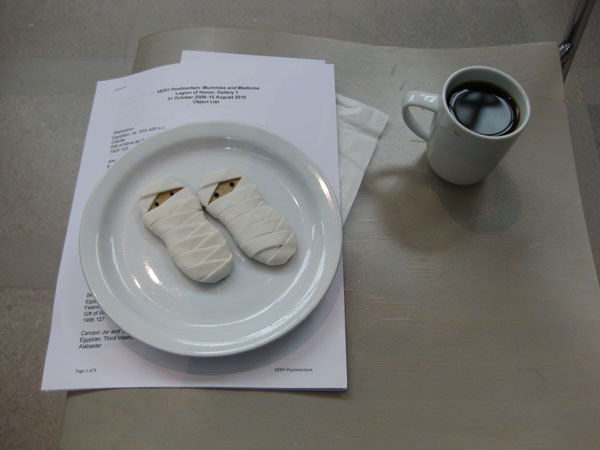 As the reception started this gentleman who looked like Ross Perot dressed by Chuck Bass’ stylist thanked everyone who supported the project and explained the gist of the exhibit to the small crowd of press that had gathered for the cookie & coffees. You see, the trust put forth by sugar magnate and Golden Gate Park Developer, Adolph B. Spreckels, has owned a couple mummies for some time now and didn’t know what to do with them.

FUN FACT: Did you know Spreckels shot, but didn’t manage to kill, Michael H. de Young (for whom the de Young Museum is named, duh) because de Young’s paper “The San Francisco Chronicle” suggested that his sugar company was defrauding shareholders? Like every political murder in this town, Spreckels pleaded temporary insanity and was acquitted. Also, the deYoung museum and Spreckels’ own Legion of Honor are now both part of the Fine Arts Museums of San Francisco. The more you know!

Anyhow, the Ross Perot gentleman spent some time discussing the people who made the exhibit possible, especially the generosity of Stanford Medical center and the woman in charge over there. I’m sure this is all important stuff that the museum Donorati like to talk about over glasses of white wine at holiday parties. In my mind, museum people are just like music nerds, or possibly worse:

That seems about right.

But then Lady in Charge of the Exhibit started talking about how exciting the 3D renderings of the mummy are and how we were, “going to feel like you’re on a wild ride!” This was exciting because at this point I was out of mummy-cookies, and considering hijacking a golf cart to have a wild ride on the Lincoln Park Golf Course cart path.

This particular mummy named Irethorrou had been living in Stockton for the past 65 years, which made me wonder if every mummy has a curse and maybe this particular mummy’s curse was to possess a local youth with the ability to play slacker rock and start a band named Pavement that would eventually break up before their second-generation of fans could even see them live. That’s such a shitty curse.

Pixar probably would have made a touching story about Irethorrou waking up in 2009 San Francisco only to find the Egypt he knows and loves has been robbed of all its treasures and riddled with bullet holesLater, on our tour of the actual exhibit, Lady in Charge would admit that “of all the things that would make our museum popular, we thought a mummy was the best idea.” Sure, perhaps in 2001 when Brendan Fraser was all the rage, but it’s all about the zombies these days. A live zombie would have brought in more museum-goers from the 15-35 demographic and would probably still be safer than the Zoo. (Too soon?)

She also mentioned that one unique aspect of the single-room exhibit was that the sarcophagus was (partially) open. You see, in other museums the ornate casket-thing that the mummy in question resides in remains closed, presumably to maintain the dead guy inside, but I guess since they had to crack it open to do the MRIs at Stanford anyhow, they left the lid propped up so you can see Irethorrou’s head and shoulders. She mentioned that this was done because children don’t ever believe that there’s a mummy inside those things. Brilliant. More museums should use 9 year-olds as their focus groups. (See also: Exploratorium.)

So how was the rest of the exhibit? Well, there were some interesting pieces of Egyptian jewelry in the cases surrounding my buddy Irethorrou. But in 2009, when the best jewelry comes from Etsy.com, it all kind of looks like something I’d buy my mom for Christmas.

The exciting 3D flyby was interesting, showing mostly the skeleton as the camera flies through Irethorrou’s spinal column. (There’s still some marrow left!) Also visible are various amulets placed underneath the layers of gauze. The video is well-constructed, but short and it’s about the level of quality you’d see on a History Channel special. After season 4 of House it all seems a little weak in comparison. Although, I understand that for reasons of integrity the organizers were right to opt for medical-imaging company rather than just walk over to the Presidio and chat up LucasArts/ILM for pro-bono work. And Pixar in Emeryville probably would have made a touching story about Irethorrou waking up in 2009 San Francisco only to find the Egypt he knows and loves has been robbed of all its treasures and riddled with bullet holes, so he must learn to love our fair city even though he’s only made of dust at this point. Mostly, I wished I could have watched the video from the comfort of an office chair, much like the video portion of the recent Maurice Sendak Exhibit at the CJM.

In conclusion, I wouldn’t say the exhibit itself is captivating enough to warrant the trip out there, but on the other hand, there’s probably nowhere else in the country (world?) where you can see a mummy and then take in a round of golf in such an idyllic setting as the Legion of Honor. At the very least, you could spend some time grabbing a bowl of Pho on Clement St. and taking in the museum’s surroundings as well as their regular exhibits. And if you’re already a member – well, then I suppose you’d better go so you have something to talk about at your parties this holiday season.