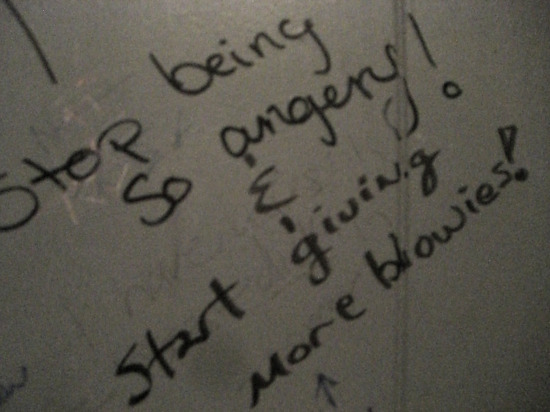 For San Franciscans, sexual open-mindedness is like what snuggies are to other Americans: warm and eminently collectible. Where some people weigh their judgments by wondering what Jesus would do, San Franciscans have a different motto: What wouldn’t Oprah do? If there’s even a remote possibility that the position they are about to attempt has been mentioned in an issue of O, then that position has probably never been attempted in San Francisco except by hipsters who are trying to be ironic.

In other cities, people write things like, “Stop being so angery [sic] and start giving more blowies,” on the walls of bathroom stalls, and in other states this is probably good advice. But in San Francisco it might be more apt to tell people to stop giving so many blowies and start getting more angry, because there is pretty much no one in San Francisco who hasn’t gone to collect their mother at the Civic Center BART station only to have the first sight she sees be someone going down on someone else in a doorway. In an attempt at levity you might try to make some kind of joke about a picture being worth a thousand blow-jays, which only makes her look at you like you planned the whole thing, which you kind of did by moving to San Francisco in the first place.

In San Francisco people have to actually fake being surprised at witnessing sexual acts in public, because honestly how many times can someone mention blowies in one article before people either stop reading or become completely desensitized? Everyone is so hung up on the effect that violence in the media has on the nation’s children that they haven’t even begun to unwrap the question of what sex on the streets of San Francisco is doing to the tots of this fair city. But as there are no children in San Francisco, whatever conclusion the scientists come to is pretty much moot.