Comedy of the Commons: Dolores Park 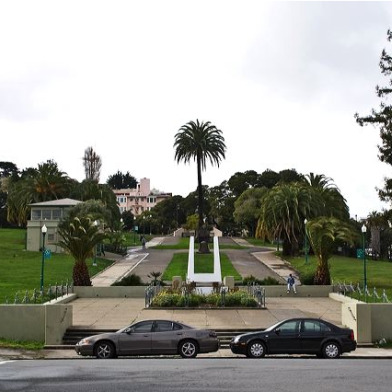 The Dolores Park community meeting Wednesday evening was, maybe appropriately, much like a group therapy session. Organizer Gideon Kramer of SafeCleanGreen was so enthusiastic in arguing for a civil discussion that it wasn’t a minute after Mission Mission’s Kevin Montgomery arrived that Kramer cornered him to vent about that blog’s coverage of the debate over the park’s future.

A few dozen others arrived, most from the blocks directly around the park but a few from further afield in the Mission and beyond. And everyone did admit there was a problem, at least with trash. Other problems cited included the bathrooms, hipsters, Mexicans, irrigation, wind, people who don’t own property next to the park, Critical Mass, politicians and, despite all these apparent defects, too many people.

And that, friends, is the essential irony. For a park that is “dying,” it is quite popular! Internationally so. Leaving the younger crowd counter-intuitively arguing to maintain the status quo, and even the older crowd admitting that it’s a better place than it was at some arbitrary point in the past when it was ruled by gangs and drug users, as opposed to now.

But there was a clear generation gap, with the introduction period amounting to one-upsmanship as to who lived closer and longer. The implication being that somehow factoring proximity and longevity mathematically lent one’s point of view more weight. Which it does not. Especially when it is matched with complaints about people and their sense of entitlement.

What Dolores Park clearly needs is more money from the city, which it is getting. After all, North Beach’s Washington Square Park probably gets as much use per square foot and is plenty lush, especially after new sod was laid last year.

What it probably does not need are new restrictions on permits, which it is also getting. Since, again, it’s sort of counter-productive to complain about un-permitted events while arguing that permits should be more difficult to obtain.

My idea? Like the city’s program that lets people pay for parking tickets with labor for volunteer organizations, peg clean up efforts to the permitting process — time spent equals discounts on fees and priority reservations. If there is anything that should actually command priveleged use of public space, working to maintain that space would be it.

And in that regard, the meeting was, eventually a success, as everyone’s invited to get back together and help pick up litter on Sunday at 2pm. Just think how superior you’ll feel if you come help!

Jackson West just moved to to the neighborhood, so probably isn’t qualified to have an opinion.