Dufty: No Elephants At Zoo Again, Ever 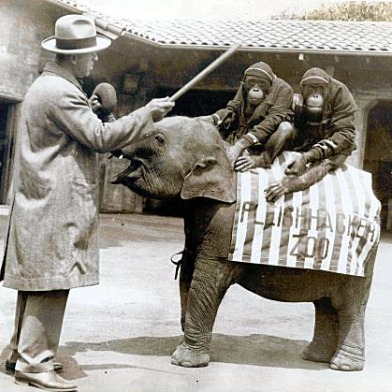 Earlier today, the mainsteam media faithfully informed us that, at least according to a fervent animal rights activist, a certain Recreation and Park commissioner keeps asking Recreation and Park staff when the San Francisco Zoo is going to get another goddamned elephant. Because, you see, my grandchildren really like elephants!

(Elephants, as you may know, are native to Africa. The Outer Sunset, where the zoo is located, is nothing like Africa. Except — no, fuck it, it is NOTHING like Africa out here. It is not hot and Savannah-like, there are no jungles or massive rivers, Joseph Conrad wrote no books about it and Dave Chappelle would never come here for a break. Nothing like Africa.)

The zoo’s been elephant free since 2005, after half of the zoo’s elephants died or were euthanized and the survivor was trucked off to the Sierra foothills (where it later collapsed and died). That led city supervisors to pass a law saying the zoo may not have another elephant until the zoo builds a 15-acre enclosure.

When might that happen? Later at that same hearing, a supervisor and mayoral candidate told us exactly when the San Francisco Zoo might get another gigantic pachyderm to rumble around its paths: never.

In the words of Supervisor Bevan Dufty — under whose mayoralty, according to Supervisor Chris Daly, the Zoo would likely remain a zoo and not an animal sanctuary, as proposed by Daly — elephants will not return to live in peace and splendor in the fog belt unless “major” changes are made at the zoo.

Such as relocating it somewhere that’s warm, spacious and not hazardous to elephants’ health. (Read a very uplifting report of the elephants’ habitat, and how they suffered from such ailments as “peg-leg” and ingested sand while walking round their pachyderm house, here).
In other words: don’t hold your breath. Elephants weren’t made to live by a cold foggy beach, and if you really want to see one, try traveling somewhere exotic: namely, Oakland.

UPDATE: We just heard from zoo spokeswoman Lora LaMarca, who told us that while, “Where are the elephants? When are they coming back?” is the “greatest amount of feedback we get from visitors” to the zoo, there are currently no plans to build a proper enclosure or bring back any elephants. “40 percent” of the zoo’s buildings were built during the 1930s and there is talk of layoffs, so the zoo has much bigger fish to fry, LaMarca said.

Like this story? Then please consider supporting the Appeal’s independent City Hall reporting at Spot.us.

Photo of George Bistany, the first director of what was then the Fleishhacker Zoo, from the SF Zoo’s archives.