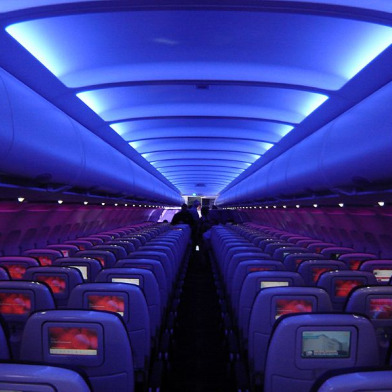 Not drinking on airplanes could almost be considered a kind of self destructive behavior, because it’s just rude to make your brain realistically comprehend what it means to be moving at 500 mph 30,000 feet above the ground. The alcohol allows you to forget the unlikely possibility that you could die on this flight, and also the inevitable possibility that you will eventually die somewhere.

It’s a miracle that people don’t faint more on airplanes. How can we bear to look down? As a child I thought that houses looked so small from planes because they were miniatures put there for the entertainment of the passengers. In some ways I’m sure I still believe this, which keeps me from crying, that and the absinthe.

Virgin America or, the best club in the sky, introduced the Mile High Absinthe cocktail ($8) to their beverage list within four minutes of absinthe becoming legal in the United States. It’s this attention to detail that makes a passenger feel safe, because if Richard Branson spends even half the time researching wind shear as he does on cocktails and purple lighting the likelihood that your plane is going to crash while you’re not drunk is very low indeed.

Or maybe not. It might have been a bad choice in mixer (Sprite and lemon), but the absinthe cocktail kind of made me never want to drink again. Or at least never again while sitting next to a self-described rapper from Everett, Washington.

I had a feeling he was going to be one of those chatty flyers the minute he placed a small pink pill on my tray table and whispered, “My buddy says these are awesome.” I normally make it a point to accept drugs from strangers, but I’m enough of an adult to know never to mix a muscle relaxant with absinthe at 30,000 feet while watching a Miley Cyrus music video. He seemed to have latched on to the ‘mile high’ part of the cocktail’s title, and soon was telling me how he much preferred older women, and since he looked to be about 16, I told him that I was 5.

The drinks may have been expensive, but crushing dreams at altitude is priceless, and for everything else it’s a long way to the ground.