We’ll Do For You What Muni Cannot 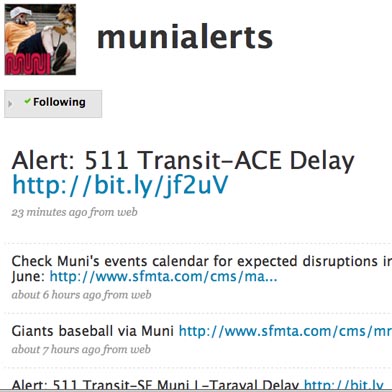 Great news: now you can get Muni alerts on Twitter! The account at twitter.com/munialerts isn’t manned by a human; instead, a script slurps up Muni’s RSS feed for announcements and spits out relevant tweets. Delays, detours, special service — befriend Munialerts and you’ll be among the first to know when Muni deigns to communicate with their customers, aka suckers.

Translating the RSS into Tweets isn’t a totally straightforward process. You will no doubt be SHOCKED to hear that Muni’s RSS is malformed, so it doesn’t validate. In fact, the items aren’t even in chronological order, and bounce around between 2009, 2008, and 2005. Sigh. XML has been around for a decade, and Muni’s engineers still can’t figure it out. (Fortunately, Twitter seems to be up to the task, parsing the glitchy feed with only occasional problems.)

By the way, did we mention that fares are going up again soon? Worth every penny!

Although this Twitter feed is a carbon copy of Muni’s official announcements, the account itself isn’t exactly official. We know this because we created it ourselves! Yes. It’s true. We did it. It’s our account, and we’re the ones with the password. Muni, if you ever want to take the reins, just say the word and it’s yours. But for now, we’re calling the shots.