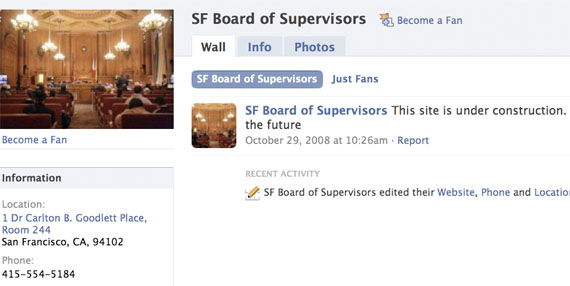 Twitter, Facebook, YouTube and other popular sites for publishing online have become ubiquitous in the news media, if not in everyone’s actual day to day lives. Recently, public officials have successfully made it onto the bandwagon by adopting these tools in their campaigns, fundraising, volunteer recruitment and, of course, garnering publicity. But are these tools truly being used to connect directly to voters and their concerns, or are they just another way to campaign?

Barack Obama certainly made hay online, with plaudits, publicity and private contributions rolling in over the course of the campaign thanks to a popular Twitter stream, Facebook chatter, and a social network, MyBarackObama.com, powered by software from local company Six Apart. Yet once elected, the new media music died. His Twitter stream went silent for weeks, and only four updates have been made since election day.

Local politicians who are “tweeting,” or regularly posting messages to Twitter, include State Attorney General Jerry Brown, San Francisco Mayor Gavin Newsom, San Francisco City Attorney Dennis Herrera, State Senator Leland Yee, State Assemblywoman Fiona Ma, and San Francisco Board of Supervisors Clerk Angela Calvillo, on the Board’s behalf. Befitting a brand new form of communication, they’re all using it differently. The one common thread is that they would presumably all be relatively easy to reach, especially by a constituent and member of the press.

Adriel Hampton works as an investigator for the San Francisco City Attorney’s office and has kicked off a congressional campaign for California’s tenth district. An avid user of Twitter personally, he maintains a profile on Facebook, and is an active participant in a social network called GovLoop, where public employees are exploring ways to better connect public service with private taxpayers. It was at his urging that the City Attorney’s office created an account on Twitter.

“We’re trying to be transparent and apolitical in a way that advances the public interest, the public’s right to know and builds public trust in the office,” Hampton said of the tone and impetus of discussion on the site. Certainly transparency and authenticity seem to be two benefits most often cited by proponents using these new communications tools in government.

Some of the decisions made San Francisco Mayor Gavin Newsom and his large communications staff and coterie of campaign aides seem to belie those types of good intentions. Newsom recently used Twitter, Facebook and YouTube to officially announce his entry into California’s 2010 gubernatorial election, garnering much media coverage and a few donations in the process.

Newsom’s aides in City Hall and his campaign team have been using these and other online tools for some time, but his office is not known for embracing radical transparency. For instance, while Newsom’s account often features replies to other Twitter users, responding to questions from the press is another matter. Repeated emails to his press secretary Nathan Ballard went unanswered (as did an email to Newsom’s likely gubernatorial opponent Brown).

Maybe the emails got lost in the shuffle. So why not play along and get in touch using Twitter? Because asking questions publicly using the service’s reply feature has gotten reporters in hot water.

“We don’t ask the mayor questions on his Twitter feed,” said San Francisco Chronicle city desk editor Audrey Cooper. There’s no need, she argued. “A press office has a lot of different ways to communicate with the press.” And they probably won’t start any time soon, especially in the wake of San Francisco Bay Guardian reporter Steven T. Jones’ experience.

Having been blocked from accessing Newsom’s updates after he asked a question publicly, Jones was accused of “flaming” or harassing the mayor online, and declared the equivalent of a -DCohn1 5/3/09 2:05 AM “troll” by Ballard. Not that it came as a particular surprise to Jones. “We’ve literally had the office door shut in our face before,” he said of his paper’s relationship with the mayor’s communications team.

So tools like Twitter don’t necessarily level the playing field for access, but they do offer an opportunity to make an end run around tough questions from critics and appeal directly to potential supporters without having to go through traditional media channels.

Tomorrow, in part two of this three part series, we’ll take a look at how well online tools work for organizing and funding campaigns. A candidate who could win office with only passionate volunteers and lots of small donations would presumably prove less beholden to the status quo of institutional support and corporate interests. Sounds great in theory, but does it work in practice?