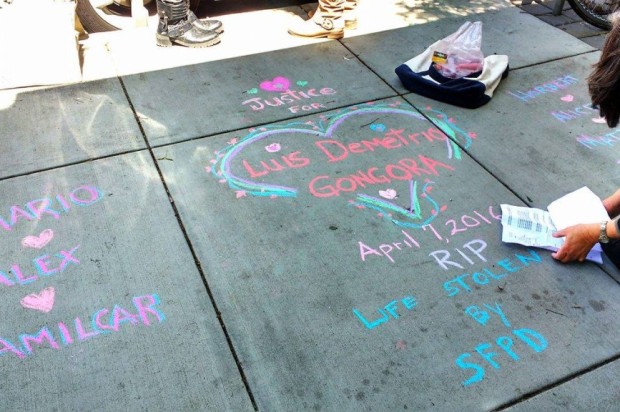 The fatal police shooting of a homeless man allegedly armed with a knife occurred after outreach workers reported seeing a man swinging a large kitchen knife as he walked down the street, San Francisco Police Chief Greg Suhr said today.

Speaking today before an angry crowd at a community meeting held by police to discuss the shooting, which occurred Thursday just after 10 a.m. on Shotwell Street near 18th Street, Suhr said the homeless outreach team members were in the area to investigate a report of a crying baby near a tent encampment.

They did not find a baby, but they saw a man later identified as Luis Gongora, 45, first kicking a basketball off of parked cars in the area and then later walking down the street “swinging indiscriminately” with a large kitchen knife, and agreed they needed to call police, Suhr said.

Two officers responded, one of them a sergeant with 17 years of experience and the other an officer with 13 years of law enforcement experience including four years in San Francisco, and a third arrived just as they made contact with Gongora, Suhr said.

The officers told investigators they found Gongora seated on the sidewalk with a large knife in his hands with the blade pointed up. They ordered him to put it down multiple times, speaking in both English and Spanish, Suhr said.

The officers said Gongora briefly put the knife down but then picked it up again, at which point one officer shot Gongora with less-lethal beanbag rounds, Suhr said.

Gongora then “stood up and ran at the officers with the knife in his hand,” Suhr said. “The officers stated they feared Mr. Gongora was going to kill one of them.”

The two officers who arrived first on the scene fired seven rounds, six of which struck Gongora according to a preliminary report from the medical examiner, Suhr said. Gongora was taken to San Francisco General Hospital but died a short time later.

Some witnesses have made statements to reporters indicating that Gongora was not holding the knife in his hand but had it strapped to his hip. Suhr today said the knife was found in Gongora’s hand, and released excerpts from witness statements that appeared to support police assertions that he was holding the knife when he was shot.

Video circulating in the media showing the time from the officers’ initial response to the time of the shooting was well under a minute. When questioned by an audience member about the department’s recent statements that officers would be encouraged to deescalate situations as a matter of policy, Suhr said the goal was to create “time and distance.”

“This event obviously went very quickly,” he said. “We will be looking at tactics to see if anything could have been done differently.”

Matthew Castro, a friend of Gongora’s, said descriptions of him as running toward police with a knife were “completely out of character.”

Castro, who said he had known Gongora for 13 years since they worked together at a Mel’s Diner restaurant, described Gongora as kind-hearted, “selfless” and “so, so docile.”

“He didn’t have a hostile bone in his body,” said Castro.

Castro said Gongora, who had three children and a wife in Mexico and two brothers here in the United States, did not speak English and might not have understood what police were saying to him. He does not have a history of mental illness, Castro said.

Statements from others familiar with Gongora’s family have described Gongora as a Mayan from Mexico’s Yucatan, and indicated that Spanish might have been a second language for him.

Castro said he had been trying to persuade Gongora to move back to Mexico because he didn’t want him to keep living on the street.

“I would love to see some justice for him but it just seems like that isn’t going to happen,” he said.

Between 75 and 100 people showed up at today’s meeting, many of them activists and residents angry about the death of Gongora and other recent San Francisco police shootings, including those of Mario Woods, Alex Nieto and Amilcar Perez-Lopez.

While the crowd listened closely during Suhr’s initial recounting of the shooting, the rest of the meeting was punctuated by shouts of “murderers!” and “This is a department out of control!” At several points, the crowd chanted “Fire Chief Suhr Now!” and “How do you spell murder? SFPD!”

Supervisor David Campos, whose district includes the area where Gorgona was shot, angrily questioned why police had held the meeting at noon on a weekday and failed to notify his office ahead of time. He also accused police of “prejudging” the case.

“You’ve had a number of press conferences where you are already prejudging what has happened in this case,” Campos said. “I ask you to please stop saying anything until your own investigation is complete.”

Members of the Justice for Mario Woods Coalition today held a rally at City Hall shortly before the police town hall meeting, repeating calls to fire Suhr and criminally prosecute officers involved in shootings and other misconduct.

Harris’s office today released a statement noting that the U.S. Department of Justice’s Community Oriented Policing Services is currently conducting a “comprehensive” review of the department. In addition, the Police Commission is reviewing use of force policies, and the Mario Woods shooting is being investigated by the district attorney’s office, the Office of Citizen Complaints and the police department’s internal affairs division.

Harris said she would “continue to monitor whether local officials are cooperative” with the federal investigation in progress.

“If investigators face resistance and the implementation of reforms falls short, I intend to launch a civil pattern and practice investigation,” Harris said.

Suhr said the names of the officers involved in the shooting will be released within ten days, as per standard department policy.