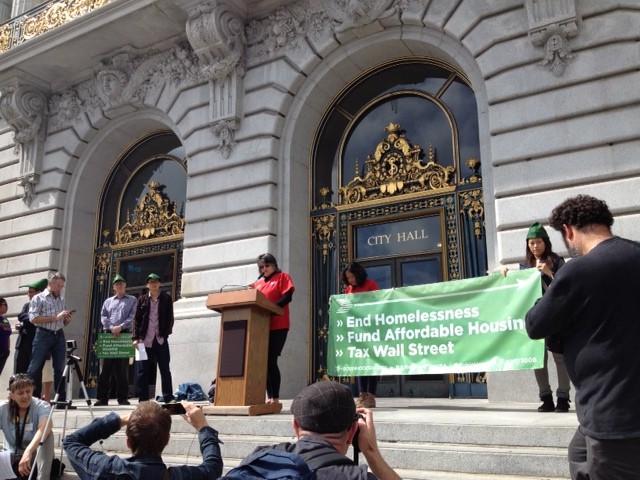 A coalition of Bay Area organizations marked the four-year anniversary of the Occupy Wall Street movement today with a rally at San Francisco City Hall calling for the Robin Hood Tax, a bill that could generate billions of dollars from the sale of stocks, bonds and derivatives, according to organizers.

“Our city is not for sale,” the crowd chanted, as speakers including San Francisco Supervisors Jane Kim and David Campos took to the podium to advocate for the bill.

“The Robin Hood Tax would tax the 1 percent on stock trades, on derivatives, all the crazy speculation, and give that to services. And those are the services that would benefit our people. People who work, people who need housing, people who need healthcare,” said Kung Feng, lead organizer for Jobs With Justice.

The “Robin Hood Tax” bill, S. 1371, is a companion to H.R. 1464, the Inclusive Property Act, which was introduced in the House and Senate by Rep. Keith Ellison of Minnesota and Vermont Senator and Democratic presidential candidate Bernie Sanders.

The event coincided with a similar day of action in New York City.

The midday rally was preceded by another rally earlier that morning, at the home of noted tech investor Ron Conway. Coalition members gathered in front of his Four Seasons residence at 7 a.m. at 675 Market St., to protest what they call “pay to play politics.”

A report released by Jobs with Justice today detailed the way the tech and real estate sectors have influenced city politics through industry-wide contributions, lobbying and behested payments, or donations made to charities or agencies at the request of an elected official, according to Jobs with Justice.

“Those favors from tech giants and real estate developers to the Mayor have been well returned, and at a public cost,” executive director Gordon Mar said in a statement regarding the report.

A tax break provided to Twitter, the under-regulated proliferation of AirBnB rentals and the city-sanctioned use of public bus stops by private tech company shuttles were examples Jobs with Justice provided of how the tech industry has influenced the city’s economy and public policies, which in return has driven up rents, according to organizers.

Yul Dorn, a pastor at the Emmanuel Church of God in Christ and a member of the Alliance for Californians Community Empowerment, spoke at the rally.

“The Robin Hood Tax is purely related to what’s happening in city hall and how we — people of color and the working class — are being pushed out because the rich aren’t paying their fair share. They’re putting their money into buying the politicians, and that’s got to come to a screeching halt. We’ve got to start investing in the long-time residents of San Francisco,” Dorn said.

Dorn, a long-time Bayview resident, spoke about his first-hand experience of dealing with eviction.

“I’ve given to this city. I’ve been a productive member of society, but yet I find myself in the throes of eviction, due to a wrongful foreclosure. So this pay-to-play politics has got to come to an end.”

“The $300 billion that could be generated with this miniscule tax, money could go to creating jobs, building more infrastructure, putting more people back to work, putting educational opportunities for people right now who can’t afford them and being a launch pad to a better life as opposed to holding people hostage because they can’t afford to go to school or have these opportunities,” Blumberg said.

After the rally, coalition members headed inside city hall to attend a Planning Commission meeting. At the meeting, members planned to voice opposition as the Commission was set to vote to approve the building of a high-rise condominium unit near Fifth and Mission streets.

“When we walk around this city, we see luxury condos coming up. And at the same time, we see people living on the streets. Something like the Robin Hood tax, something like a more progressive housing policy would help build housing. The solution to homelessness is housing,” Feng said.

“Things here are out of control. The occupy movement helped us think about it, but now the inequality is obvious and people can see it.”