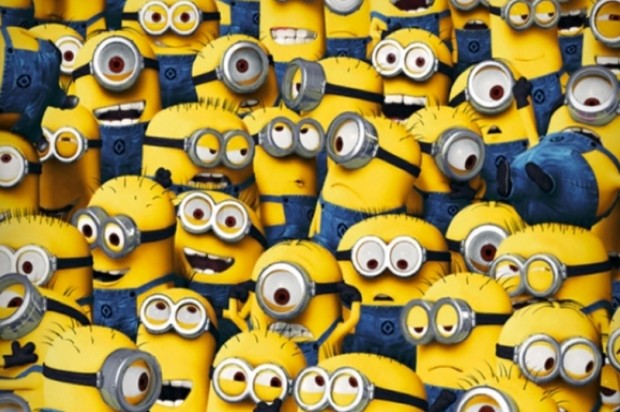 The Gallows
The marketing campaign for horror movie The Gallows consists of trying to position its killer, Charlie Grimille (and his weapon of choice, a noose) as the next Jason or Freddy. Some slick marketing department ace must have come up with the idea of The Gallows based on their own experience of torturing the theater kids when they were in high school. Just have the whole thing sprinkled with liberal use of found footage fairy dust, (you can thank the folks behind Paranormal Activity and Insidious for this) run adverts with night vision camera footage of people freaking out, and you have a rated R gold mine on your hands.

Minions
Speaking of marketing and branding opportunities: Minions, the third film in the Despicable Me franchise is a prequel/spin-off explaining the asexual worker people history before they hooked up with Steve Carrell’s Gru. It’s not so much a film but rather an attack vector in order to brand everything in nightmare-inducing Minions. Apparently the Minions are single cell organisms that serve only the most despicable people in history before killing them (which is more than I needed to know about Minions/Despicable Me world building). The best I can ask is a bunch of secret histories of the world. The Minions are a working class (and marketable; never forget marketable) Illuminati. Who knows, maybe they are just a representation of our alienation from the workforce.

Self/Less
The king of racial ambiguity, Ben Kingsley, slums it. But don’t worry; thanks to the premise of the movie, Ben Kingsley becomes Ryan Reynolds because the movie is about transferring the consciousness from old, wrinkly, racially ambiguous bodies into new, totally white bodies that can fuck and have total Entourage-esque wish fulfillment fantasies. But since this is a C-tier sci-fi movie, getting your consciousness transferred into a new body isn’t without its consequences.

Amy
Described as “haunting,” the documentary about the late Amy Winehouse is making its way to the Bay Area.