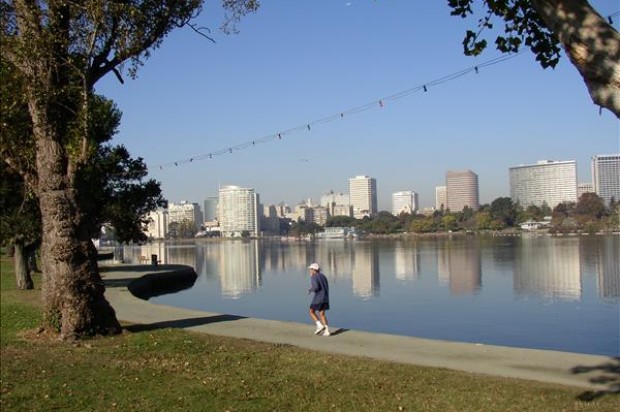 Oakland city officials on Wednesday celebrated the completion of improvements near the Lake Merritt boathouse.

The project included replacing the platform between the boathouse and lake, building an entry plaza, improving disability access from Bellevue Avenue and improving the habitat for birds and aquatic life, city officials said.

The project represents another improvement to Lake Merritt and the area around the lake, according to city officials.

Two prominent projects already completed were the renovation of the municipal boathouse and transformation of the south end into an amphitheater where residents and visitors celebrated the Golden State Warriors’ NBA championship last month.

“Lake Merritt is our city’s crown jewel,” Mayor Libby Schaaf said in a statement. “These improvements to our lakefront have brought Oaklanders closer together, helping to revitalize our city and create an even more vibrant community.”

“It sets the bar for what we can do,” said Matt Nichols, Schaaf’s policy director for transportation and infrastructure. Nichols was at Wednesday’s celebration in place of the mayor, who was away.

Nichols said the shoreline project represents vibrant urban infrastructure. Perhaps the most noticeable improvement is the walking path east of the boathouse, which now allows residents to walk along the lake.

“I think it’s a huge improvement,” lifelong Oakland resident Kate Offer said. “Now you get to see every inch of the lake.”

The cost of the project was $7.37 million, with most of the money coming from a 2002 Measure DD bond fund. The California State Coastal Conservancy gave $300,000 in funding for the project.

The conservancy is a state agency, which works to protect and improve coastal resources, according to its website.

The new shoreline also offers more educational opportunities for kids. Teachers can take children to look in the mud and learn about wetland habitat, according to Sarah Herbelin, recreation supervisor for the Lake Merritt Boating Center and Community Gardens.

One of the overriding goals of the project was to reconnect people to the lake, Herbelin said.