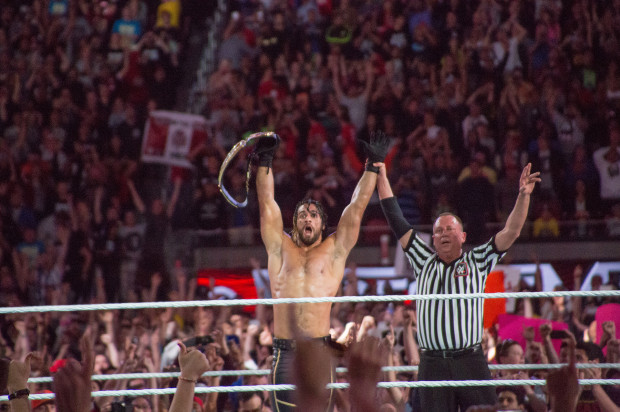 The buzz and excitement of the Golden State Warriors’ first victory in forty years is still fresh in the air, and on the morning of their victory parade IN OAKLAND, let us take this moment to recount how WWE Heavyweight Champion Seth Rollins predicted a Cavaliers loss in front of a Cleveland audience on WWE’s Monday Night RAW. Remarking that Lebron wasn’t going to bring the championship back to Cleveland while also referring to an in-attendance Cleveland Browns quarterback Johnny Manizel as Johnny Idiot Face, Rollins added that his world championship was the only such championship the Cleveland crowd would be celebrating.

Although, to be fair, the NBA championship trophy was in Cleveland. Much like Seth Rollins, it just left “this piece of crap town.”

Cheap shitting-on-the-local-sports-team-heat-or-not, it was Seth Rollins after all who cashed in his Money in the Bank briefcase at this year’s Wrestlemania held at Levi’s Stadium in Santa Clara in March. [View our full coverage right here]

Winning the championship title from Brock Lesnar only deepens the narrative of championships and the Bay Area (or confirming my mind is great at creating narrative threads). Hell, Seth Rollins probably doesn’t even care if the Golden State Warriors won the the NBA title. He never did mention the team by name during his promo, which is refreshing (and not like those awful “Obama wearing a SF Giants cap” t-shirts floating around years ago).

The new crop of Bay Area people jumping on the Warriors bandwagon will be — much like Seth Rollins — young, talented, and utterly entitled twenty-somethings in Oracle Arena next season who don’t give a shit about what it was like to root for a team that would break their hearts year after year.

Enjoy yourselves at the parade, true believers! GO WARRIORS!