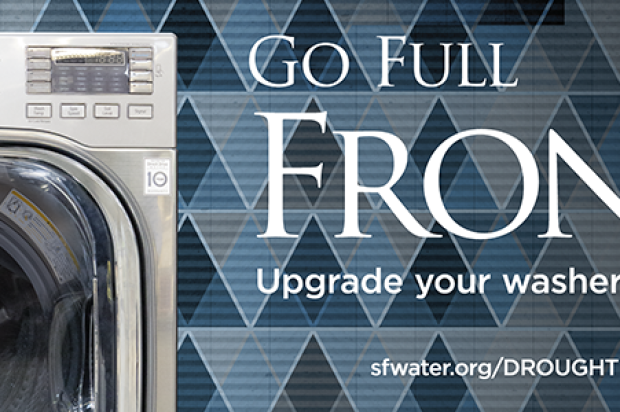 Bay Area residents are doing a good job reducing their water usage, but San Francisco Public Utilities Commission officials hope an eye-catching ad campaign unveiled today will encourage them to do even more in an effort to meet state conservation goals.

The ads, which will be seen on billboards, buses and bus shelters in San Francisco as well as in San Mateo and Alameda counties, encourage residents to take a “Short and Steamy” shower or to go “Full Frontal”-with a front-loading, water-conserving washing machine, that is.

Water demand for the Hetch Hetchy system is well below the five-year average so far this year and total system usage is at its lowest point since the drought of 1977 despite an increase in the overall number of customers served, SFPUC officials said today. San Francisco residents average 44 gallons per day, and 11 percent of the California cities with the lowest residential per capita water use are within the Hetch Hetchy system.

The Hetch Hetchy reservoir, a key water supply for San Francisco and large portions of the Bay Area, is 92 percent full, while the overall Hetch Hetchy system is at 53 percent of its storage capacity, according to Steven Ritchie, assistant general manager for water enterprise.

“The net effect is that we’re in a good position going into the summer,” Ritchie said.

However, the state is asking San Francisco for a 10 percent water use reduction and a 25 percent reduction for outdoor water use. Bay Area agencies that purchase water from the Hetch Hetchy system are also asking their customers for reductions.

Last year, the 26 agencies that purchase water from Hetch Hetchy reduced water use by 14 percent, but this year they need to cut by 17 percent, according to Nicole Sandkulla, CEO for the Bay Area Water Supply and Conservation Agency.

“With new ads catching our users eyes, we can educate the public about easy ways to reduce their indoor and outdoor water user,” Sandkulla said in a statement.

San Francisco residents can obtain free water-saving devices such as low-flow showerheads and kitchen-sink aerators, and customers with regional agencies should check with their water companies for rebates for conservation measures such as lawn removal and the installation of low-flow toilets and washing machines, officials said.

As much as 4 million gallons a day of drinkable groundwater could be produced by one project within San Francisco city limits by 2016 or 2017, officials said. The water would be blended with existing drinking water supplies.