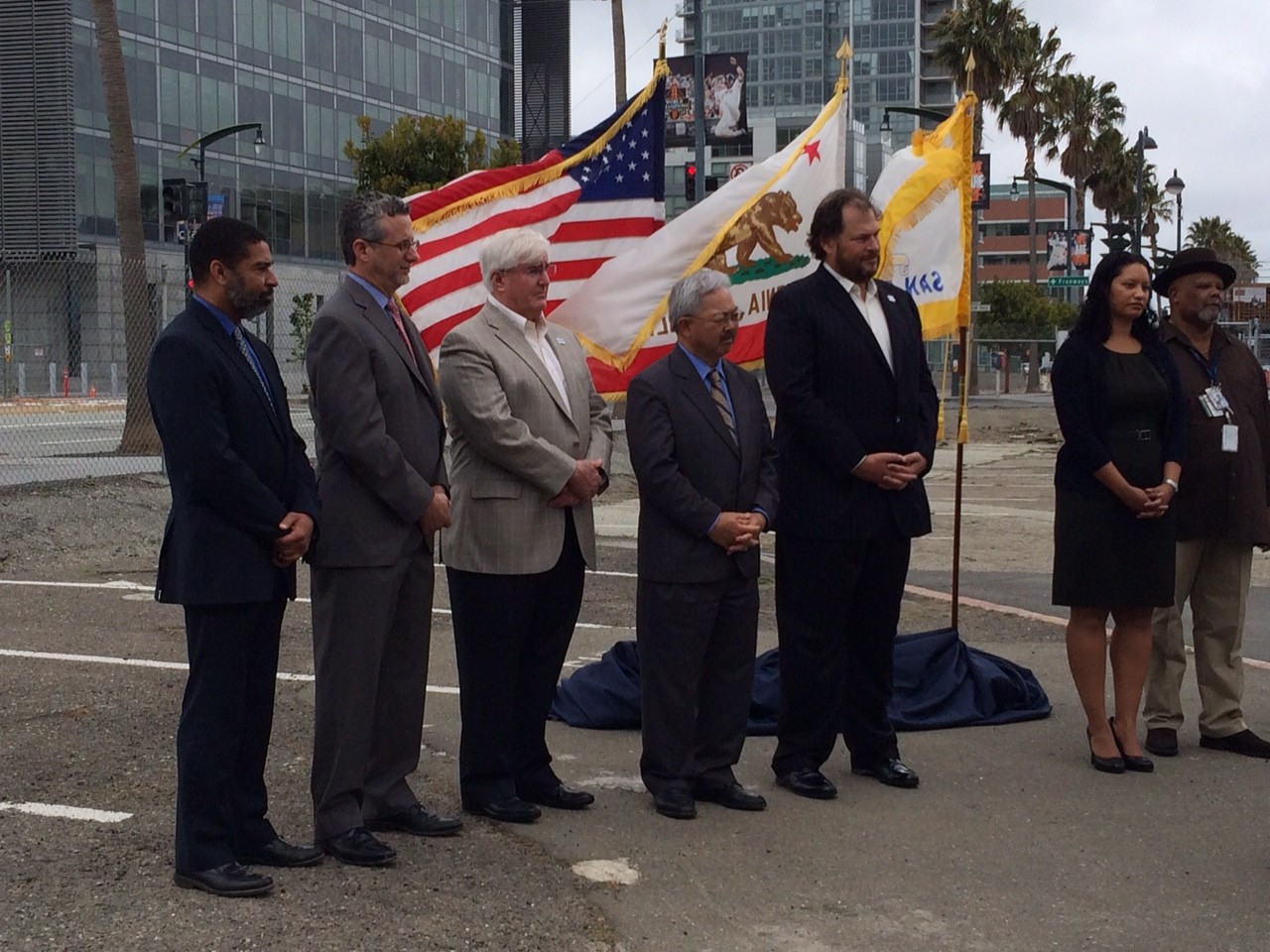 Lee, along with tech investor Ron Conway and Salesforce chief executive officer Marc Benioff, said a plot at 1150 Third St., near Mission Rock Street, is the intended site of an apartment building consisting of 50 housing units for formerly homeless veterans and 50 more for formerly homeless families, with one unit for an on-site manager.

Located close to the proposed site of the new Golden Gate Warriors stadium, the one-acre plot is now comprised of a large parking lot with cracked pavement and tufts of grass poking through.

The announcement today, just prior to the Memorial Day weekend, of $5 million in private contributions from technology and business leaders via the San Francisco Citizens Initiative for Technology & Innovations, known as sf.citi, warmed the soul of Vietnam veteran and formerly homeless man, Duane Ray.

Ray, 66, said that when his parents passed away he found himself having to fend for himself out on the streets, without shelter and without a job.

Ray said these new units would provide veterans in need of a chance to stay in the city and move forward with their lives.

“This gives them hope they haven’t had,” Ray said.

The city’s partnership with sf.citi, chaired by Conway, will leverage the $5 million to accelerate the planned affordable housing project and bolster on-site social services for families and veterans in need, according to the mayor’s office.

Lee said that the funds donated by Benioff, Conway and others, will advance the construction of the $48 million housing project by about a year.

Conway said when he realized how much this public-private partnership would be able to accomplish, he immediately agreed to donate funds.

“That’s the best investment a tech investor can ever make,” Conway said today.

Benioff agreed with the mayor and Conway, explaining that he is happy to see San Francisco leading the way on ending homelessness.

“We are doing something for those in our city who have given so much for our country and deserve our deepest help,” Benioff said today.

Benioff said the decision to give to the “men and women who risked their lives for our freedom” was an easy one.

He expressed his frustration, saying that it’s “just not acceptable” that nearly 50,000 homeless veterans are living on the streets on any given night around the country.

Benioff said “this is a problem we can solve,” explaining that VetForce, launched by the Salesforce Foundation last year, aims to help veterans attain fulfilling careers through access to training, opportunities and jobs.

All veterans in the new apartment building will have access to VetForce and the employment opportunities it can provide to them.

Rick Waltz of the Golden Gate Warriors, said the Warriors are also happy to donate funds to the construction of the new housing units.

Waltz said the Warriors, through the Helmets to Hardhats program, will be recruiting veterans into work on the construction of the new Warriors arena, as well as provide veterans with jobs once the arena is completed.

In addition to the Conway family, the Benioff family, Thiel and the Golden Gate Warriors, initial contributors include tech entrepreneurs Sean Parker, Andrew Mason, Drew Houston, Alfred and Rebecca Lin, along with two anonymous donors, according to the mayor’s office.