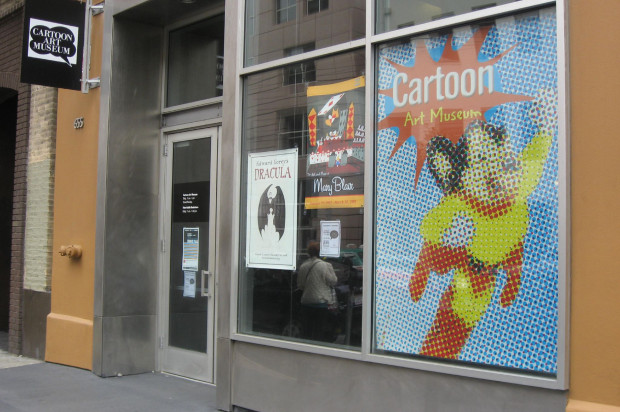 Officials at the Cartoon Art Museum announced Friday the museum will remain at its current 655 Mission St. location through September, after it had originally announced it would close its doors in June while museum staff searched for a new location.

The museum has been at that location since 2001, but back in April museum officials said they were looking for a new space because the landlord was planning on increasing the rent to more than double the current price.

However, museum officials said they recently got an offer from their landlords, Brad Bernheim of Coast Counties Property Management and Matthew Cuevas of Cappa and Graham, Inc., to extend their lease for a few more months.

The museum is currently on a month-to-month tenancy after their lease finished a few years ago according to the museum’s executive director.

“We knew that we could not sustain our location as the economy skyrocketed and have been looking for a more long term space for a while,” Executive Director Summerlea Kashar said in a statement.

The museum’s current Mission Street location, dubbed the Yerba Buena arts district, is within a block of the San Francisco Museum of Modern Arts, the Yerba Buena Center for the Arts and the Museum of the African Diaspora.

“Coast Counties Property Management is a family run business that takes a genuine interest in our tenant. Over the years, we have contributed significant monetary support to the Cartoon Art Museum as well as our other valued tenants,” landlord Brad Bernheim said in a statement.

“I was really touched when Cappa and Graham came to me with the offer to help extend our current term in our location, even just for a few months,” Kashar said. “It was heartwarming to hear that Matt and Brad were willing to support us.”