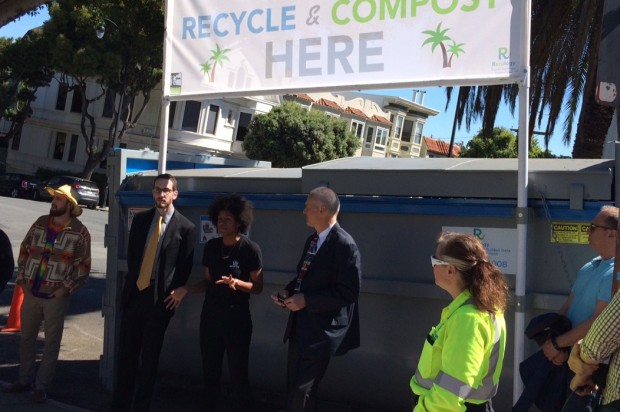 A pop-up recycling and composting system was unveiled today in response to an abundance of litter left behind by picnickers at San Francisco’s Dolores Park.

The San Francisco Recreation and Park Department, in partnership with the waste management company Recology, has placed large containers on Dolores Street where picnickers, with the aid of waste-sorting volunteers, will separate discarded items.

Recology spokesman Robert Reed said adding to the compost collected by Recology is one of the best things city residents can do to help conserve water.

Reed said the compost is delivered to more than 300 wineries in Northern California, as well as walnut, almond and pecan orchards, among other farms.

The compost attracts and retains water, allowing farmers to use less water on crops, cultivate nutrient-rich fields and have larger crop yields.

San Francisco Supervisor Scott Wiener stood next to the waste-sorting stations today and said the problem of littering at the park has spurred an “organic community response” from local merchants and community members.

“I think this is a big step forward,” Wiener said.

Recology has donated the waste-sorting system to help keep the park clean and numerous volunteers are being scheduled to help during the park’s busiest hours on weekends and holidays.

Reed said most of the material generated by picnickers is glass, metal and other recyclables. Many items such as napkins and paper bags can be composted.

He said recycling and composting are some of the most beneficial things we can do to help the environment and that with the new system, “It’s going to be easy as pie.”

Rob Hanke, district manager for Recology, said a study of the trash at Dolores Park revealed that roughly 65 percent is recyclable or compostable.

He said the remaining trash tends to be plastic bags, non-compostable cartons and potato chip bags.

Hanke said Dolores Park picnickers, and anyone who cares about the environment, should become smart consumers and do their best to avoid purchasing goods that have non-recyclable packaging.

He said many shops in San Francisco already offer compostable and recyclable packaging, but that in order to achieve zero waste, big grocery chains need to follow suit.