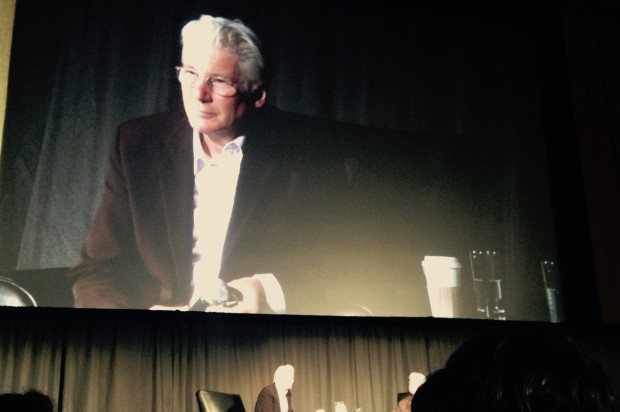 The San Francisco International Film Festival is well underway, and everything I’ve seen thus far has been pretty good. A highlight has to be David Thomson’s talk before the documentary Listen To Me Marlon. Well, not so much the talk, which was good, but the fact that two of Brando’s kids (Miko and Rebecca) were there and able to contradict some of Thomson’s criticisms of Brando, which were, at times, a bit mean-spirited. (I believe Thomson had left by that point, but I’m glad the audience was able to hear both perspectives.) The film screens again on Wednesday, with an appearance by the director Steven Riley.

And of course, seeing Richard Gere in person at the Castro was a thrill, even if the movie that followed (Time Out of Mind) was a bit a challenge. He had some good tales to tell, (I had no idea his brother David used to write for the Chronicle!), and he weathered the awkward (why are they always so awkward!?) questions from the audience with good humor.

Here are some of my picks for the next couple of days of the festival. As always, be sure to check out their calendar for a complete list of movies playing.

Paul Schrader, (whose 1980 film American Gigolo starred Richard Gere), is being honored with the Kanbar Award, and will partake in an on-stage interview. That will be followed by a screening of his 1985 film Mishima: A Life in Four Chapters. 6:30 P.M. at the Kabuki.

I work out a gym about twice a week, and it never fails to be amusing; gyms are just inherently hilarious places. Which is why I’m looking forward to the comedy, Results, starring Guy Pearce and Cobie Smulders as two trainers and the various lunatics who frequent their Texas gym Power 4 Life. 6 P.M. at the Kabuki, with another screening Wednesday at 9 P.M.

Speaking of Cobie Smulders, she’s also in Unexpected, about a high school teacher in Chicago who finds herself unexpectedly pregnant, and then latches on to a student going through her own pregnancy. Director Kris Swanberg is scheduled to make an appearance at Wednesday’s 6:30 P.M. screening at the Clay, as well as Thursday’s 6 P.M. showing at the Kabuki.

One of the festival’s definite must-sees is the documentary Romeo Is Bleeding, which has its world premiere at 7:30 P.M. at El Cerrito High School. Yes, you read that right: a high school. It’s an appropriate completion of a circle, since the documentary is centered on a high school production of Romeo and Juliet, which was updated and reset in modern-day-Richmond, California, and performed at the high school.

Now, updating Romeo and Juliet to a modern setting isn’t a radical thing; it’s been done many times before. What makes Romeo Is Bleeding so compelling is its portrait of inner city Richmond that I bet very few San Franciscans are even aware of. Seeing these kids write poetry and use art to rise above the incredible violence and loss that surrounds them is inspiring, but be warned: the movie doesn’t hold back. Lives are lost during the course of it, and it’s devastating.

If you can’t make it out to Richmond, it’s also screening Friday at the Kabuki, and Sunday at the Pacific Film Archive in Berkeley.

Another Bay Area-centric bit of programming is Boomtown: Remaking San Francisco, which will include short films as well as live storytelling, all addressing the question “How does San Francisco deal with change?” Participants include local writers, artists, and activists. 7 P.M. at the Kabuki.

Finally, it wouldn’t be a film festival without at least one Jason Schwartzman movie, right? Well, this fest has two, and Friday’s is 7 Chinese Brothers starring Schwartzman as a man adrift, with no real friends–save for his French bulldog–and only one living relative. And then a job at a Quick Lube changes his life. It screens 6:30 P.M. at the Clay, with additional screenings Friday and Saturday at the Kabuki. (Schwartzman and director Bob Byington are scheduled to attend Saturday’s showing.)