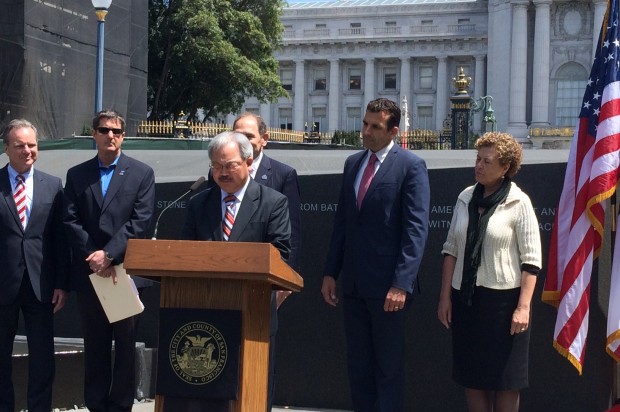 McDonald, along with San Francisco Mayor Ed Lee, San Jose Mayor Sam Liccardo and other Bay Area community leaders, gathered at the Veterans Memorial near San Francisco City Hall today to announce a 33 percent national decrease of homeless veterans since the White House and U.S. Department of Veterans Affairs issued a 2010 plan to end veteran homelessness by the end of 2015.

Last month McDonald announced that the Department of Veterans Affairs would be awarding nearly $93 million in supportive services for veteran families in 15 communities nationwide, including San Francisco, in the form of three-year grants that will help approximately 45,000 homeless and at-risk veterans and their families.

“We all agree there is a moral obligation to end veterans homelessness,” McDonald said today.

According to Veterans Affairs, the department committed more than $1 billion in fiscal year 2014 as part of the Veterans Initiative to strengthen programs that prevent and end homelessness among veterans through services such as health care, housing, job training and education.

Mayor Lee said today that with the help of this federal funding, San Francisco is on track to end veteran homelessness within its city by the end of this year.

Furthermore, he said, there are services being put in place that will help newly returning veterans quickly access education and jobs to prevent them from slipping into unstable living situations.

Lee said last June he took on First Lady Michelle Obama’s Mayors Challenge to End Veteran Homelessness and said he is pleased to report that the city is on track.

He accredited the current success to support from public and private partnerships, such as those with the U.S. Department of Housing, San Francisco Veterans Medical Center, the San Francisco Housing Authority, the non-profit Swords to Plowshares, as well as real estate developers, among others.

Lee announced that the city would house all chronically homelessness veterans by providing funding for new supportive housing units, the final budget piece of a multi-year effort to house more than 500 veterans who, as of 2013, were chronically homeless in San Francisco.

“Our work is not done,” Lee said today, explaining that there remains an incredible challenge for veterans living in the Bay Area due to the high cost of living.

Lee pointed to the successful completion of 250 Kearny St., a property in San Francisco that provides 130 formerly homeless veterans with housing.

Johnnie Browning, a veteran who served in the U.S. Armed Forces from 1982 to 1993, said today that he is a resident at 250 Kearny and smoothly transitioning into his new abode.

Browning said he moved into his new apartment about a month ago and has already made friends with veterans and feels a strong sense of security.

He said after his military service ended in 1993 he came to San Francisco and worked at numerous non-profit organizations but around 2005, found himself without a job and without a solid place to live.

Browning said he would sleep at friends’ houses and never dared go to a homeless shelter, calling them “very risky,” since he had heard that what few belongings he had might be taken from him at the shelters.

After years of suffering from depression and substance abuse, he said he finally reached out to Swords to Plowshares in 2013 and was connected with Veterans Affairs, which led him to receive the social services he greatly needed.

Browning said he has completed 200 days of sobriety and continues to have access to a social worker, a therapist, a psychiatrist and a primary physician through Veterans Affairs.

He credits much of his sobriety to Veterans Affairs and said he hopes others who are struggling reach out for help as well.

According to Browning, while some veteran services took a while to come through via Veterans Affairs, once they did, it was like a “security blanket” had been spread over, allowing him to focus on living a happier, healthier and more productive life.

Michael Blecker, the executive director of Swords to Plowshares, said today that that when it comes to veteran homelessness, the organization has always been “walking point,” military parlance for taking the most exposed, leading position in combat formation.

Blecker said, however, that he is thrilled that the U.S. Department of Housing has finally stepped up on a national level to make housing vouchers available to veterans and that Veterans Affairs is now stepping up to make social services more available for veterans.