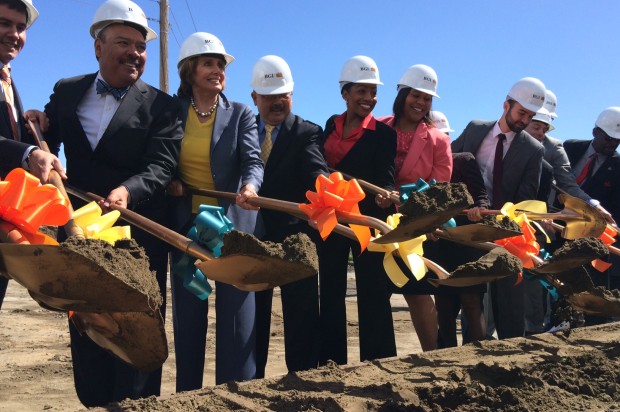 Democratic Leader of the U.S. House of Representatives Nancy Pelosi and San Francisco Mayor Ed Lee helped break ground today in San Francisco’s Bayview District on modern mixed-income and mixed-use apartment buildings that will replace the barrack-style structures that have made up the Alice Griffith public housing complex since 1963.

While the streets were initially designed to slow down traffic and protect children, Lavelle Shaw, president of the Alice Griffith Tenants Association, said today that the design made residents feel isolated. It cut the residents off from private businesses, public transit, and was easily avoided by the rest of the city’s residents.

“We was always forgotten, we was always left out,” said Shaw, 48, describing the complex as a “lost city”.

Shaw, who has lived in Alice Griffith for 35 years, said he wants to see the neighborhood, known as Double Rock, and the people who live there, take advantage of the opportunities that will come from the development and finally integrate with the rest of the city.

Pelosi, city leaders and developers today said the five phases of the new development, which is backed by a $30.5 million federal Choice Neighborhood grant, will accommodate residents of every income level and be a model for the city and the nation.

The program aims to not only create housing, but sustainable neighborhoods, with accessible grocery stores, jobs and schools.

Shaw said he is excited that he and other Alice Griffith residents will be able to live somewhere that others will want to live, a place with a strong and healthy community.

Pelosi expressed her excitement for the development and explained that it wouldn’t be possible without President Barack Obama’s commitment to public housing.

She said his administration has supported low-income tax credits for developers, which provide incentives for the use of private equity in the development of affordable housing for low-income Americans.

“We’re not only working together in community for the good of people here, we are setting an example for the nation so that we can say it works, you can do this other places,” Pelosi said.

“Take pride in what it means for housing policy in our country,” she said.

Tiffany Bohee, executive director of the Office of Community Investment and Infrastructure, the successor to the San Francisco Redevelopment Agency, said that residents will begin moving into the new units next year.

Sandra Moore, president of Urban Strategies Inc., who has led teams across the country in helping residents and community stakeholders transform distressed urban communities into vibrant and safe neighborhoods, said that the entire project has gone slower than she had hoped but that they have finally reached a milestone and will now be able to pick up speed.

She said there will be a lot of green spaces and that the public housing will be architecturally indistinguishable from market-rate housing.

The goal of the project, Moore said, is “protecting the rights of the people who have been here all this time but then creating an inviting community” for new residents.

San Francisco Supervisor Malia Cohen, who represents the Bayview District and the rest of District 10, said today that this development shows that the Bayview is more than the guns, violence and drugs that have plagued it.

Cohen said this investment in the Double Rock residents will allow them to prove that, “we are more like a phoenix and that we will rise up and continue to claim our victory.”