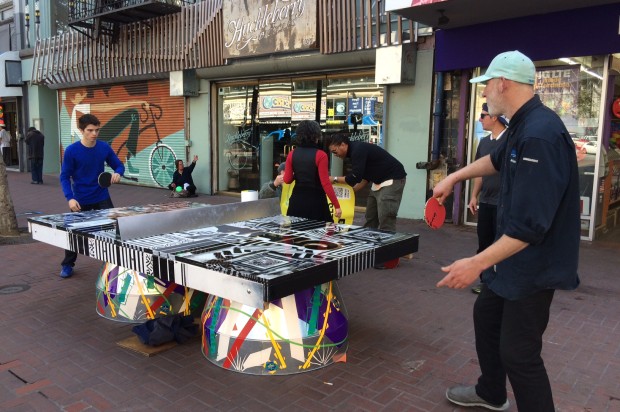 San Francisco city officials and pedestrian advocates said during today’s celebrations of Walk to Work Day that additional safety precautions are still needed to end pedestrian fatalities in the city.

Kim said her district sees the highest rate of pedestrian-vehicle collisions in the city, despite the fact that the vast majority of Tenderloin residents don’t own cars.

She said she is excited about daylighting projects in her district.

Daylighting is a pedestrian safety measure that makes pedestrians more visible at intersections by removing barriers, such as parked cars, from within at least 10 feet of a crosswalk or intersection, according to the San Francisco Municipal Transportation Agency.

The simple safety measure allows pedestrians, especially children, to remain on the crosswalk until it’s safe to cross, instead of having to walk out past the parked vehicle and into the street to see if vehicles are about to enter the intersection. Motorists are also able to see if someone is waiting to cross.

According to the SFMTA, since almost all the streets in the Tenderloin are considered high-injury streets, already 80 intersections in the neighborhood have been improved with daylighting.

Ed Reiskin, the SFMTA’s director of transportation, said today that in a city with more than a million trips made on foot everyday, it is important that pedestrians are made more visible and that vehicles slow down.

Supervisor Norman Yee said today it’s important that the city remembers that “walking safely is not a privilege, it is a right.”

Reiskin said today that vehicles in San Francisco strike roughly 800 people each year and that about 100 of those struck are seriously injured.

While Gascon said his office prosecuted all eight vehicular manslaughter cases that crossed his desk last year, he said today that he believes preventative measures, such as engineering and public awareness, are the real solutions and could greatly decrease the number of traffic-related deaths in San Francisco.