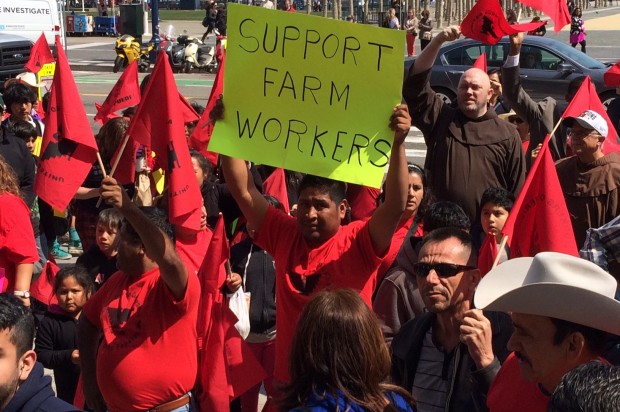 United Farm Workers of America President Arturo Rodriguez and members of the San Francisco Board of Supervisors gathered with dozens of farm workers employed by Central Valley grower Gerawan Farming to celebrate the birthday of civil rights activist Cesar Chavez this afternoon in San Francisco and to demand that their employer obey California law and respect workers’ contracts.

Rodriguez has led the United Farm Workers of America, which was founded by Cesar Chavez in 1962, since Chavez’ death in 1993.

According to Rodriguez, Gerawan workers have a contract and said that Gerawan Farming must implement it. He said the UFW, “will keep fighting for that contract” until it is in place.

Supervisors David Campos, John Avalos and Jane Kim spoke with the farm workers outside City Hall this afternoon and told them that the City of San Francisco, along with the state of California, is taking a stand for the rights of farm workers everywhere.

The board of supervisors voted unanimously today on a resolution supporting Gerawan farm workers, their right to be represented by the United Farm Workers and urging Gerawan Farming to implement the terms of their contract.

“We know when we come to San Francisco we won’t be alone,” Rodriguez said.

Rodriguez said today that California has led the way and must continue to lead the way in improving working conditions for agriculture workers.

Ofelia Reyes, a 46-year-old fruit picker who lives in Fresno, came to the rally today to shed light on injustices and demand Gerawan Farming to honor the contract.

Reyes said she has worked at Gerawan Farming for 14 years and is a single mother raising five children.

Reyes, who picks and cleans produce for Gerawan Farming from April to November each year, said she is not allowed to work during the pruning season because she is female.

“Yes, I am upset,” Reyes said through a translator. She explained that pruning is an easy job that she is more than willing to do, but that her company won’t let her.

Rodriguez said today that it’s important to note that female farm workers in the U.S. are still facing gender discrimination and sexual harassment and that the UFW is committed to protecting them.

Rodriguez said he, and the UFW, stand in solidarity not only with Gerawan farm workers and their struggles, but also with produce pickers who are making “between $7 and $8 a day” in Baja California, Mexico who have gone on strike to demand fairer wages.

He said that while the strike in Mexico is not yet impacting produce prices in the U.S., the prices could certainly rise if it continues.

Supervisor Kim said it’s important to remember that American consumers rely on farm workers both in California and in Mexico for their food and should not take them for granted.

Gerawan, which has been in operation since 1938 and now employs roughly 5,000 people, offers a base pay of $11 per hour to workers, according to its website.

Dan Gerawan, co-owner of Gerawan Farming, said in a video posted on the company’s website that while Gerawan agricultural workers voted in favor of representation by the UFW in 1990, the UFW participated in one bargaining session and then “disappeared” for 20 years.

California’s Agricultural Labor Relations Board certified the UFW as the exclusive bargaining representative of Gerawan workers in 1992.

According to Dan Gerawan, the UFW resurfaced in 2012 demanding bargaining sessions begin again and requiring employees to pay 3 percent of their wages in union dues or else be fired.

Gerawan said the UFW asked California’s ALRB to create and impose a contract between Gerawan Farming and its employees.

According to Gerawan, the company’s employees attempted to decertify UFW and were allowed by the ALRB to hold an election, but said since the November 2013 election, the ALRB has not allowed the votes to be counted.

According to the ALRB, both the UFW and Gerawan Farming “allege that misconduct occurred that affected the results of the election.”

While both blamed the other of misconduct, Gerawan also alleged that the ALRB’s regional staff “mishandled the election.”

UFW officials say that the contract, issued in 2013 by a neutral mediator and approved by the state, is valid and must be implemented.

On its website Gerawan Farming said, “The next step is to release the ballots, count the votes, and determine if our employees want union representation. The ALRB must get out of the way and allow that democratic process to occur.”

According to the UFW, Gerawan “is avoiding millions of dollars in pay increases and other benefits by refusing to honor the union contract.”