Teens Rally for Right to Vote in Local Elections 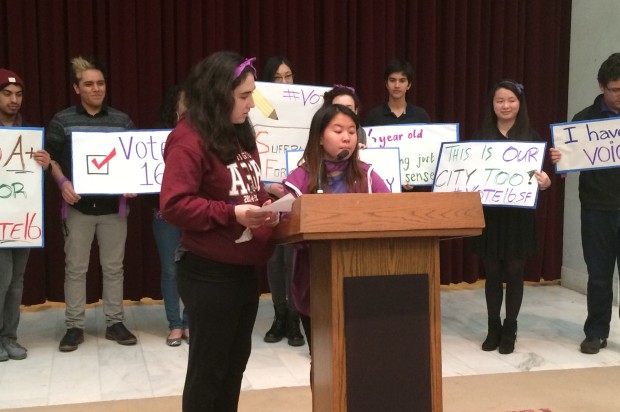 A large group of teenagers urging city officials to allow them to vote in local elections rallied at San Francisco City Hall this afternoon.

Avalos said that while he authored the legislation, it was brought to his attention by the San Francisco Youth Advisory Council.

Avalos said teens bringing this issue to him and seeing their ideas through “shows young people can be engaged” and could be even more engaged if given the opportunity.

Mar said other countries have already lowered their voting age and understand that teenagers “know what’s going on in our community.”

Mar said that by lowering the voting age, not only will youth be able to participate in the electoral process, but they will be able to help shape the city’s policies with their values.

Anna Bernick, a 17-year-old junior at George Washington High School said today that she wants the right to vote because she believes her ideas matter and should be heard.

Bernick said she has been part of the San Francisco Youth Commission since she was 15 years old and eager to see legislation that would give her and her peers a chance to weigh in on issues that impact them.

Anna He, 16, said she knows she’s young and short, but that doesn’t mean she likes being overlooked.

“My age does not define how I feel,” she said.

He said she finds hypocrisy in the notion that 16 year olds can drive, work without time restrictions and pay taxes, but aren’t given the right to vote.

“I have my own opinions and I want them to be heard,” she said.

Avalos said that more young people should be voting and that lowering the voting age will help voters understand from a young age that they can make a difference.

Today’s efforts follow on the heels of decisions by city councils in the Maryland cities of Hyattsville and Takoma Park to include 16 and 17 year olds in municipal elections.

According to Avalos’ office, San Francisco will be the first major city to consider lowering the voting age to 16.