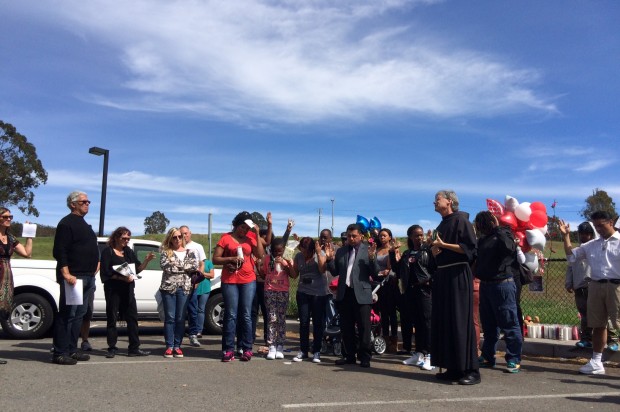 A 21-year-old man who was driving a stolen vehicle sought by police in connection with the double homicide of two teens at San Francisco’s Crocker Amazon Park earlier this week has been arrested, police said today.

San Francisco Officer Grace Gatpandan said today that the fatal shooting of 19-year-old Donzel Gaines, of San Francisco, and 18-year-old Kenyatta Butler Jr., of San Leandro, remains under investigation and that no suspects have been arrested in direct connection with their deaths. The two were found dead in a car on Monday morning in the parking lot of the Crocker Amazon Playground.

However, Gatpandan said that police identified a stolen vehicle involved in the double homicide and arrested 21-year-old Davante Robinson, of San Francisco, around 1:15 a.m. on Wednesday as he and a male passenger were in the vehicle at Ingalls Street and Quesada Avenue in the city’s Bayview District.

Robinson remains in custody but is not facing homicide charges, she said.

Police have not released any suspect description or a possible motive for the shooting.

Police said that both victims appear to have been shot while sitting in the car and were pronounced dead at the scene.

This afternoon, grieving friends, family and community members gathered in the parking lot at Crocker Amazon Playground near Geneva Avenue in San Francisco’s Excelsior neighborhood to remember the two teenagers who were fatally shot.

Butler’s mother, grandmother, aunt, and sister were among the family who attended the vigil this afternoon. They described Butler as a good kid with a big smile.

Butler’s aunt, Deanna Lockridge, said she and her nephew were very close and that he would usually spend the week at her house in San Francisco, instead of with his mother in San Leandro.

Lockridge said that Butler grew up in San Francisco playing football and basketball and attending school in the community.

When his mother moved to San Leandro, Butler held tightly to his San Francisco roots and friends, Lockridge said.

She said up until Butler’s death, she saw him everyday and talked to him about everything. She said most of his clothes are still at her house.

Butler’s mother, Mimi, Lockridge’s twin sister, said her son’s death is the most painful thing she has ever experienced and that she wouldn’t wish the feelings on her worst enemy.

“I never thought that I would be in this position, burying my son,” she said. “It hurts so bad.”

Butler’s mother said the day he was shot he should have been in class at the San Leandro high school where he was enrolled.

Lockridge said Butler was a good kid and that other people might have been jealous of him, since he had a great smile, was attractive, social and got a lot of attention from girls.

“I hope they find whoever did this,” Lockridge said during the vigil.

None of Butler’s family members could conceive of who might have wanted to hurt Butler and said they believed he was “set up,” but didn’t know by whom.

Friends and family said Butler and Gaines were good friends and that members of Gaines’ family were unable to make it to the vigil.

Butler’s grandmother, Carolyn West, who splits her time between her daughters’ homes in San Francisco and San Leandro, said that as much as she misses her grandson and can’t believe he’s gone, she doesn’t want his death to incite retaliation.

“Kenyatta was not a bad kid,” West said. “He was sweet. He just got with the wrong thing.”

At the prayer service this afternoon, West encouraged the community to prevent further tragedies by teaching children how to love one another.

West said she believes retaliation would only breed more hate and that she believes “those who killed will have no peace.”