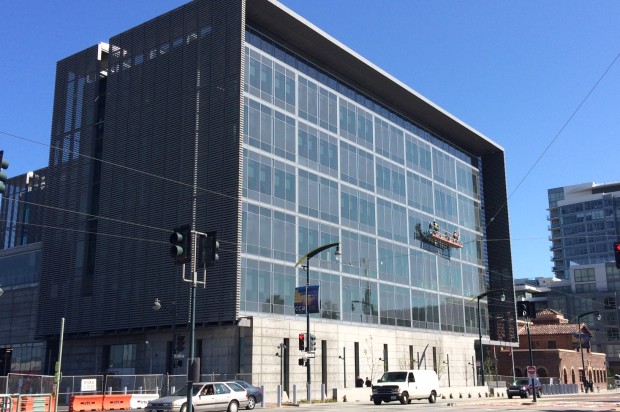 The new $243 million Public Safety Building, located on Third Street, about two blocks south of AT&T Park, is the first step in a ten-year city plan to move occupants of the Hall of Justice to secure and safe buildings.

On Saturday, the police department’s Southern station will become operational out of the new building.

The San Francisco Fire Department’s Fire station No. 4 will also move over to the new building on Monday.

Police Chief Greg Suhr, as well as operations and administration officials, will move to the new location on April 13.

Originally scheduled to open in February, the 270,000 square-foot Public Safety Building, designed collaboratively by architects at HOK and Mark Cavagnero Associates, is anticipating LEED Gold certification, and will be among the city’s most seismically safe buildings.

Minor delays, such as small fissures found in the building’s foundation, as well surveying hiccups, and Information Technology issues, pushed the opening back by roughly a month, according to Rachel Gordon, a spokeswoman for the city’s public works department.

According to Charles Higueras, a program manager with public works, the fissures manifested late last year and were quickly remedied.

He said because the building was constructed on land that filled in Mission Bay, known as bayfill, the water table is high and surrounding soil is soft. Building on it requires that pilings be used to reach the bedrock and a foundation that can absorb “relentless” pressure, causing fissures.

He said the fissures were small and were promptly sealed.

The move to the new building couldn’t come soon enough, as the Hall of Justice at 850 Bryant St., experienced three power outages on Tuesday and ventilation issues today.

While police will move out of the building in the coming weeks, the San Francisco District Attorney’s Office, the county jail, the state court rooms, the medical examiner’s office and other city offices will remain.

Higueras said the Hall of Justice won’t be completely vacated for five to seven years, despite safety concerns.

SF Superior Court spokeswoman Megan Filly said the outages at the Hall of Justice affected only the building’s west side, including the District Attorney’s Office and traffic court, and did not cause any cancellations or postponements in criminal courts.

Traffic division computers were moved from Room 145 to the criminal clerk’s office in room 101.

Capt. John Goldberg, the police department project liaison for the new Public Safety Building, said the new structure is blast and ballistic resistant and can operate off the grid for up to 96 hours after an earthquake or other major disaster.

The new building was designed with energy and cost savings in mind, such as solar heating of water, reuse of grey water, rainwater collection for irrigation, a green roof and active chilled beams for heating and cooling of the building, according to police spokeswoman Grace Gatpandan.

According to the architects, a 1920s masonry fire station at the site was rehabilitated for community use, while the new building’s glass exterior will provide “an appearance reflecting open government.”