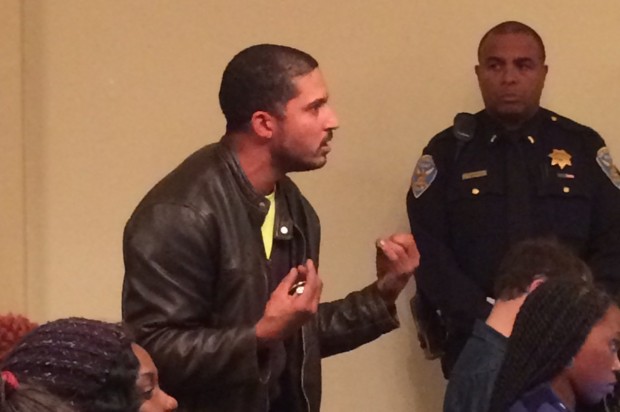 Members of the public called for the resignation of San Francisco police Chief Greg Suhr this evening during a town hall meeting he hosted to discuss an officer-involved shooting, which ended with the death of a 24-year-old woman who was driving erratically in a stolen car last Tuesday.

At the town hall meeting Suhr discussed the events that allegedly led up to plainclothes police officers fatally shooting San Francisco resident Alice Brown after she allegedly went on a driving rampage at the intersection of Van Ness Avenue and Pine Street last Tuesday night while allegedly trying to escape pursuing officers.

Members of the community who attended the meeting held banners commemorating the lives of those who have died in officer-involved shootings. A number of people said Suhr can’t handle the job and should retire or resign.

Suhr asked the public to keep the conversation and all questions on the subject of last Tuesday’s fatal shooting.

He said the two plainclothes officers who shot and killed Brown were Sgt. Thomas McGuire and Officer Michael Tursi.

Suhr said the two officers responded in an unmarked Ford Crown Victoria at 7:07 p.m. last Tuesday to the intersection to investigate a possible stolen vehicle.

Members of the public urged the police chief to explain why the San Francisco Police Department decided to send two officers in civilian clothing without a marked patrol car to the scene to investigate.

Suhr and members of the Police Department’s media relations unit said that it is not against police policy to send plainclothes officers out to investigate such crimes.

Attendees at the town hall meeting, some of whom had lost loved ones in other officer-involved shootings, argued that sending officers without uniforms and without marked patrol cars causes confusion and can lead to an escalated situation.

According to Suhr, officers located the suspect vehicle, a blue four-door Volkswagen sedan, at a Chevron gas station.

The officers approached the vehicle on foot and identified themselves to the driver, according to Suhr.

Brown put the car in gear and drove toward the officers, then tried to drive away from the gas station, hit a building and turned onto Pine Street, where she turned around and started driving the wrong way down the street, police said.

Officers allegedly chased after the car on foot but Brown drove onto a sidewalk, then drove toward the officers for a second time and hit another building and several parked vehicles, police said.

Brown again entered the roadway going the wrong way, hit more vehicles and forced a motorcyclist to abandon his vehicle on the roadway to avoid being hit, police said.

Police said Brown drove back onto the sidewalk and that the officers then fired at least two shots at the car from their department-issued firearms.

The car ended up on the sidewalk of Pine Street about 50 feet west of Van Ness Avenue.

The officers gave aid to Brown, but she died at the scene, police said.

Police said the officers fired at the woman because she was endangering the lives of the officers and nearby pedestrians.

Officials have not yet said whether drugs or alcohol were factors in the incident.

Brown also had two felony warrants for her arrest at the time of her death, Suhr said.

At least two eyewitnesses at the scene during the officer-involved shooting were at the meeting today and commented on police actions during the incident.

Eyewitness Tammi Abney, told Suhr, “What you said was not true.”

She said she had just bought gas at the Chevron station when the incident began. She said she heard one shot then after a short gap, four more shots.

Abney asked police why they had to pursue Brown and why they couldn’t have let her go. She said officers escalated the situation.

Another eyewitness, Michele Herzberg-Moran, who said she was in one of the cars that Brown struck at the intersection, said as far as she can tell everything the chief said this evening appears accurate and truthful.

However, Herzberg-Moran said she had a feeling that the men in civilian clothes were officers, but had no way to know for sure.

She said that Brown was trying to get through gridlocked traffic by ramming cars.

“The car was being used as a weapon and it was scary,” she said.

Brown’s family also attended the community meeting and while they did not make comments, DeWitt Lacy, an attorney at the law offices of John L. Burris, said his office is conducting an investigation into the police officers’ use of force and if necessary, will file a lawsuit against the officers and the city.

“We want answers just like many folks,” Lacy said following the meeting.

She said officers in civilian clothing approached her son while he was in a car before fatally shooting him.

Suhr said the officer-involved shooting remains under investigation by the Police Department’s homicide detail and its internal affairs division, as well as the San Francisco District Attorney’s Office and the Office of Citizen Complaints.

Some members of the public at the meeting expressed their concern that because the investigations are led by city government employees, they cannot be truly independent.