And How Efficiently Traveled Was the Road to Wrestlemania, You Ask? 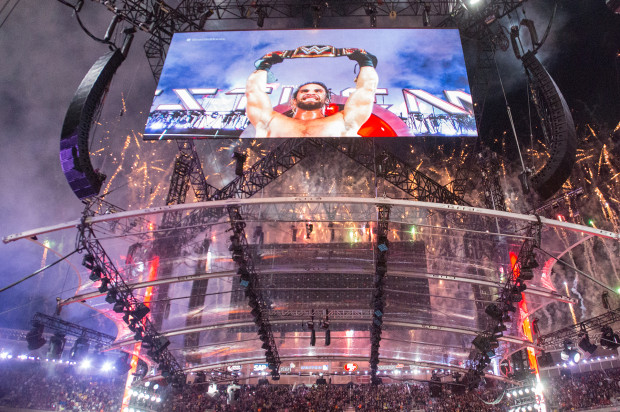 The Road to Wrestlemania is a tag line (and probably copyrighted) that essentially describes the entire WWE’s collective journey to the biggest event of the year. For myself and SFAppeal’s own Paolo Sambrano, it was lovingly redefined as the “tracks to Wrestlemania.” We aimed to get as local as possible, from alternate bus routes to catching BART for no good reason all for the sake of further pushing Bay Area infrastructure’s limits. The best way to analogize this is really through wrestling, though. The weekend’s transit felt like rapid-fire royal rumbles set to your own personal entrance music. It was frenetic and unexpected with equally surprising lulls.

An email sent at 9:30am Friday morning had me hoofing it all the way up Mason St to catch the likes of John Cena and Hulk Hogan as they arrived at SF’s Fairmount Hotel (the wrestlers actually stayed at the San Jose incarnate) and greet awaiting guests on a regal balcony like relative royalty. A dog howled and howled as John Cena kissed Nikki Bella from multiple stories away. Then I rushed to BART, only to take Muni, to get to CalTrain to be picked up at Diridion and dropped off at a John Cena pizza party at the San Jose Tech Museum, which then took me to the consumerist mecca of Axxess for prime “look at that fuckin’ cosplayer” photos and a bit of wrestling.

How did I get home that night? By car. A combination of an overstuffed NXT and fans holding court just outside the SJSU event center giving their best impressions of jabronis and legends alike made it simply impossible to take anything but abhorrent-ass Uber back to the city, unless I happened to know a car owner. As a testament to the unifying power of wrestling, the ride came from a friend of Paolo’s I’d only met that evening. The David Lynchian vibes of a 2am drive with zero cars but plenty of wrestling podcasts had us deliriously cackling the whole ride through.

If there’s a public transit bingo card, I’d had nearly blacked everything out by 2pm Saturday. That morning saw the jarring experience of Muni to Bart to bus to bus, only further highlighting the missing pieces of the transit puzzle that have been ignored time and time again. Hell, Caltrain still doesn’t have the cash money bitches to get even remotely useable wi-fi in their waiting areas, if that’s any indication of what all is lacking in an area that prides itself on its connectivity.

A straw poll of out of town fans showed that most were staying in San Jose. Still, the VTA’s light rail system provided little for the South Bay fan to rely upon. Their website only promised that trains would be running an hour after Wrestlemania let out with no mention of frequency. Consistent browsing of the Wrestlemania and Levi’s Stadium website had “call the stadium” as the number one tip for getting to said stadium. Meanwhile, the stadium seriously had its hands full. A particular highlight was watching media unknowingly use Axxess credentials to gain entrance. It’s not their fault — no Levi’s Stadium staff checked or had any idea what was going on enough for them to realize the laminate was different.

For even the most unaware of observers, all signs pointed to Wrestlemania being the precursor to the Super Bowl. We set records in Levi’s Stadium that very well may not be surpassed by the time the NFL takes over. If there were a gimmicky decibel meter, I’m sure its read would’ve been off the charts come Seth Rollins’ epic Money in the Bank cash-in. The biggest difference between the events, however, is the caliber of joyful fans. Even if the VTA fine-tunes its transit and CalTrain actually gives enough of a shit to run later, if not more frequently, y’all most certainly won’t get an entire shuttle singing “He’s Got The Whole World In His Hands” but swapping “world” with bizarre wrestling shit like Cenation (that’s John Cena fans, not an entire country composed of interwoven hundred dollar bills) and the Undertaker.

The NFL is doing a solid job of alienating its fans and players. A public transit bump in the road certainly won’t endear them any further, especially in an area where journeymen superstars are abandoning ship in legitimate but still painful ways. I’ll always love you, Frank Gore. Always. Even if the red and gold play a Super Bowl home game, it won’t be a spectacle without issues. Fans who travel in from the East Bay are set with a loop-de-loop of shitty transit options as is the much closer San Francisco, to say nothing of the North Bay’s totally “out there” status. You can’t take the ferry to Levi’s Stadium. Yet.

Do more than brand a VTA train, wrapping it in black, white, red and Wrestlemania — actually serve the people who board it. If not for the sake of generating revenue that may (hopefully?) be earmarked for continued improvements for Bay Area residents then for the sake of not getting nationally humiliated for not having your shit together. We have a little over ten months to prepare for the biggest football event of the year that marks its half century anniversary. Wrestlemania laid the groundwork for this road; now let’s get to paving it.