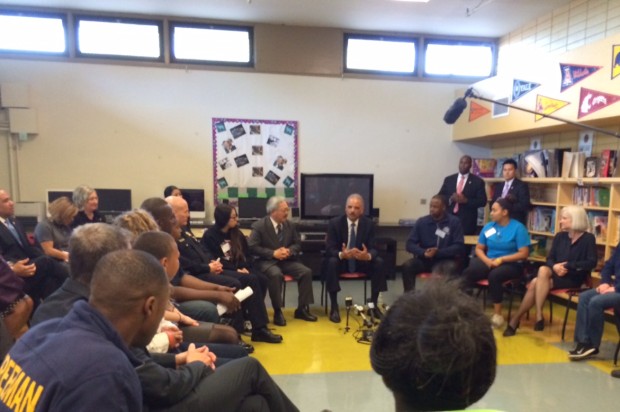 The clubhouse where Holder arrived this afternoon was bustling with San Francisco police cadets who help out at the clubhouse as part of their recruit program. During their time at the clubhouse, the recruits have the opportunity to get to know the children and families in the community.

Holder’s arrival in San Francisco this afternoon followed a community roundtable discussion on improving police-community relations in Oakland this morning with city officials, activists and community and business leaders.

Upon arriving at the Boys & Girls Club in Hunters Point, which is perched on a hill overlooking the San Francisco Bay and is known for community-based programs that foster mentorship, collaborative relationships between young people and law enforcement, Attorney General Holder sat down with roughly two-dozen community members to talk about issues in their community and possible solutions.

Holder said he hoped all those attending today’s discussion at the clubhouse, which included a diverse group of students and police cadets as well as San Francisco Mayor Ed Lee, U.S. Attorney for the Northern District of California Melinda Haag, and San Francisco police Chief Greg Suhr, among others, would take this opportunity to speak their minds.

“I hope that you all will be open, honest, candid and share your thoughts,” Holder said in his opening remarks.

Holder said he decided to come to the clubhouse because it is a place where police cadets and youngsters in the community are already building a sense of trust by working and playing together. He said he hopes San Francisco, and the country, will be able to expand on those efforts.

“We’ve seen a lot of instances in our country over the last few months that have given us great concern about police involved shootings,” Holder said today.

After visiting five other major cities in the United States, Holder held a final discussion in Oakland today on improving police-community relations in an effort to share best policing practices and find ways to build trust between communities and law enforcement and increase the integrity of the justice system.

The meetings were part of the Obama Administration’s response to nationwide protests over police killings of unarmed black men, most notably in Ferguson, Missouri, and New York. Holder said it is the first time a president has taken on reforms in local law enforcement since the Johnson Administration.

“We have an opportunity now to deal with these issues,” Holder said today.