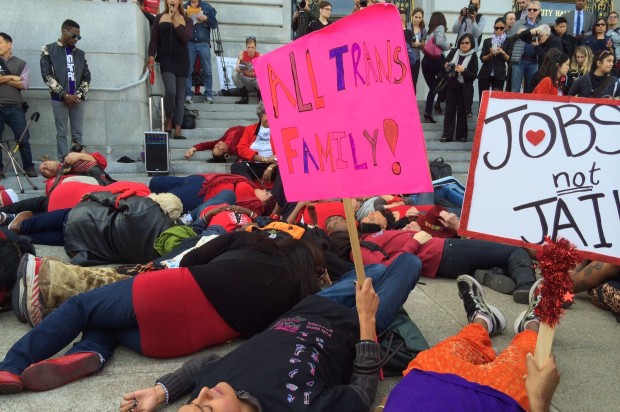 A large crowd consisting of dozens of transgender people and their supporters, many dressed in red and carrying banners, peacefully assembled outside City Hall this afternoon to hold a die-in to symbolize the violence that transgender people are facing in their community.

The rally to raise awareness about transgender violence in the city and push for preventative measures was sparked by the Feb. 1 murder of San Francisco resident Taja De Jesus.

The report states that 60 percent of transgender Latinas feel unsafe walking around during the day in San Francisco, in comparison to 12 percent of the LGBTQI respondents overall.

Since De Jesus’ death, community organizations have formed an alliance under the name Trans Activists for Justice and Accountability (TAJA) Coalition, consisting of the Transgender Law Center, SF LGBT Community Center, Center of Excellence for Transgender Health at the University of California at San Francisco and Trans Life at the SF AIDS Foundation, among others.

In a statement released by the TAJA Coalition this week, members said they “recognize this epidemic of violence as being deeply rooted in systemic racism, trans misogyny, class inequity, and lack of access to affordable housing for trans communities.”

The coalition described this violence as a national crisis.

“In Taja’s memory, we will not relent in demanding justice,” the coalition said in a statement this week.

According to San Francisco police spokeswoman Officer Grace Gatpandan, De Jesus was located on the steps of a building in the 1400 block of McKinnon Avenue near Lane Street in the Bayview District on Feb. 1.

She was found suffering from multiple stab wounds and was pronounced dead at the scene by paramedics, according to police.

After interviewing witnesses, officers determined that the suspect fled the scene on foot before police arrived at the scene.

While police did not provide further information regarding the suspect’s identity or the suspect’s motive for the homicide, the TAJA Coalition reported that the man who killed De Jesus took his own life shortly after taking hers.

The TAJA Coalition listed their demands prior to today’s die-in, stating a demand for cisgender people, or people who are not transgender, to end violence against trans communities and halt transphobia, particularly against transgender women of color.

The coalition also called for safety and access to resources. In response to plans for a new jail for trans persons in San Francisco, they demanded that new jail construction cease with funds being routed instead to trans community programming, such as re-entry support and anti-violence work.

Also among the collation’s demands were safe, affordable, and accessible housing for trans people.

“The rising cost of living in San Francisco, fueled by municipal protections for corporate interests at the expense of our most vulnerable residents, has forced countless trans people into unsafe living situations,” according to the coalition’s statement.

Danielle Castro, a 39-year-old San Francisco resident, said De Jesus befriended her during a recovery program in San Jose and gave her hope in her struggle against transphobia.

Castro said she is saddened to know that her friend was a victim of hate in a city that is known for its acceptance.

Sadaisha Shimmers, a 30-year-old San Francisco resident who said she arrived in San Francisco seeking refuge after being a victim of sex trafficking in Oregon, encouraged transgender folks to share their concerns or their own painful stories today.

“Us not speaking is the reason why we’re dying,” Shimmers said.

Shimmers, who works as a makeup artist and motivational speaker, said that transgender people are not a source of entertainment and deserve respect from the public and city leaders.

Many of those who lay on the ground during the die-in later spoke about their concerns regarding the city’s lack of protection of trans people.

San Francisco native Vanessa Rochelle, 24, urged San Francisco Mayor Ed Lee and the Board of Supervisors to prioritize trans lives such as his own.

At the Board of Supervisors meeting following the rally, trans people and their supporters urged the supervisors to protect trans lives.

Among the supervisors who expressed their concerns for violence perpetrated against the trans community was Supervisor David Campos, who stressed the importance of policymakers owning the struggles of the transgender community and the need for them to address the “epidemic of hate” against trans persons.

Campos also called for a hearing to address the violence prevention needs highlighted by the Human Rights Commission’s report.

“Our silence is deadly,” Campos said.