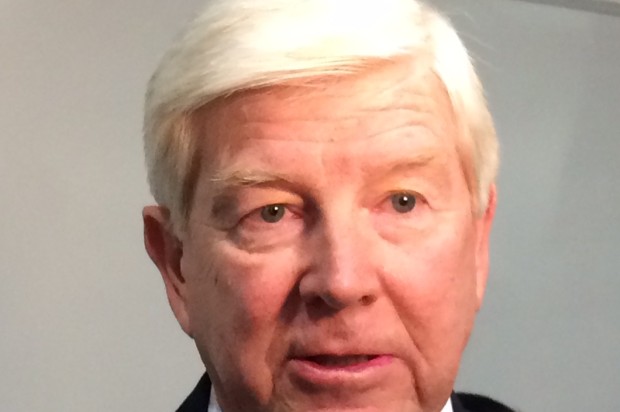 Students, faculty and members of the City College of San Francisco community protested today’s appointment of a special trustee who will oversee the transition of governance back to the college’s elected board of trustees in July.

Agrella was appointed by the California Community Colleges’ board of governors in July 2013 to help keep the school open after the Accrediting Commission for Community and Junior Colleges decided to revoke City College’s accreditation, citing issues with the school’s finances and governance structure.

The extraordinary powers granted to Agrella, and now to Lease, take decision-making authority away from the college’s elected trustees and gives that power to the special trustee instead.

A large group of protesters, who maintain that the appointment of another special trustee is undemocratic and unnecessary, voiced their concerns at a meeting held by the college’s administration this morning.

Protesters entered the meeting, streaming past San Francisco police officers, and addressed Lease with boos while encouraging him to step down from his new position.

Many protesters said today that the initial decision to appoint a special trustee was based on a recommendation by the ACCJC, but the ACCJC’s credibility is now in question.

San Francisco City Attorney Dennis Herrera filed a lawsuit that ended with a judge issuing an injunction allowing the college another opportunity to defend itself against the ACCJC’s decision.

“ACCJC is now shown to have broken the law,” Rizzo said, adding that the regional accreditation committee failed to act in good faith and that even after the appointment of Agrella in 2013, and the removal of the board’s authority, the ACCJC still failed to grant accreditation to the
college.

Alondra Aragon, a 19-year-old student who attends CCSF with hopes of becoming a teacher, said today that she is disappointed in the administration’s decision not to reinstate the powers of the board of trustees.

Aragon said she felt that as a community college, the school has a responsibility to listen to the community and respect the elected board members’ positions and authority.

Aragon said as an aspiring educator, it has been emotionally difficult to watch courses being cut at the college, many of which benefited students seeking English language skills.

Furthermore, Aragon said the recent policy decision have been impacting her education negatively as well, since half of the courses she registered for in the fall semester were canceled without prior notice.

Rafael Mandelman, the president of the board of trustees, said today that while he supports the appointment of Lease, he would work hard to reduce the power of the special trustee in the coming months and hopes that full power will be transferred back to the board by this July 1.

Originally, the board of governors planned to return full authority to the college’s elected trustees by July 2016, but following the judge’s ruling in the lawsuit, have moved up the date by a full year.

“I have done as much as anyone else in this room to fight the ACCJC,” Mandelman said today.

Due to the bad publicity generated by ACCJC’s threat of closing down the college, “People believed City College was closing,” which led to a huge reduction in enrollment, Mandelman said.

Rizzo said the bad publicity has resulted in a student population of approximately 80,000, down from around 110,000 students prior to the recession.

He said the loss of many of those students can be attributed to the fiasco stemming from the ACCJC’s threat to revoke accreditation.

Chancellor Harris said today that he expects control of the school to go back to the local elected trustees this July as the school works to settle its accreditation issues.

“The college is now in compliance with 90 percent of the accreditation standards and local board involvement in completing the recovery is in everyone’s best interest,” he said.

Lease, who will receive an annual salary of $216,000, slightly less than his predecessor in the full-time position of special trustee, said today that he hopes to, “work myself out of the job.”

Rizzo, who comparatively, earns about $500 a month as a member of the seven-person board of trustees, said that the issue goes beyond CCSF’s accreditation and that the situation in which CCSF finds itself highlights a statewide need to improve transparency of college accreditation processes.