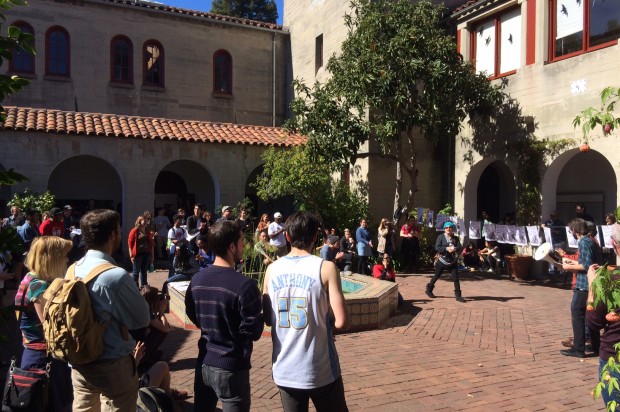 Adjunct faculty members at the San Francisco Art Institute, along with their supporters and counterparts at colleges across the country, walked out of classes today during the first-ever “National Adjunct Walkout Day” to protest the job insecurity experienced by part-time instructors.

On the San Francisco Art Institute (SFAI) website, Carolyn Duffey, who teaches cultural studies at the institute, is described as a visiting faculty member who holds a PhD from the University of California at Berkeley in comparative literature, but Duffey said she isn’t visiting, she’s been employed by the school for 11 years now.

Duffey works part-time as a visiting faculty member at the institute, teaching no more than four classes per school year.

To subsidize her income, Duffey also teaches at Stanford University and California College of the Arts (CCA), making the trek between San Francisco, the Peninsula and the East Bay on a regular basis.

Duffey’s experience is a familiar one among adjunct faculty members as SFAI, as well as those at colleges across the Bay Area and the United States.

Duffey said that not only are part-time instructors limited to teaching four courses per year, they also don’t have offices and thus, don’t hold office hours for their students.

Many adjunct instructors also don’t receive sick leave or health insurance, nor do they feel that they have enough of a voice on course curriculum decisions.

In 2014, however, adjunct faculty members at SFAI, as well as at Mills College, CCA, St. Mary’s College and Dominican University voted in favor of joining SEIU Local 1021, and this year, for the first time, they are involved in contract negotiations with the college administrations.

Duffey and fellow adjunct instructors at SFAI, who make up 85 percent of the institute’s faculty, expressed their concerns with a system that they feel fails to support instructors who are not tenured.

According to SEIU Local 1021 spokeswoman Jennifer Smith-Camejo, who attended the rally at SFAI today, these five non-profit Bay Area colleges are either in or heading toward contract negotiations.

“The pay is inadequate considering they have advanced degrees,” Smith-Camejo said. “There is unrest.”

Smith-Camejo said that through unionization adjunct faculty members are now able to explore ways to get a better deal from their administrations.

Among the top priorities of the first union contracts at the five schools are improved compensation, job security and stability, access to benefits as well as a voice in academic governance, Smith-Camejo said.

Duffey, who is on the adjunct professor’s contract negotiations team, said negotiations are in progress and so far they seem to be moving in a constructive direction.

Rachel Schreiber, dean and vice president for academic affairs at SFAI, is the lead contract negotiator on the administration side and agreed that both sides are approaching the negotiations in good faith.

She said there are currently four open positions at SFAI for tenured faculty and that an international search for professors is underway.

She said among the concerns she has heard expressed by adjunct faculty members are a need for increased job security as well as input in curriculum decisions.

Schreiber said that today’s rally was part of a national movement to support adjuncts and not a protest against SFAI’s administration.

“We were surprised to see our part-time faculty participating because we are negotiating in good faith,” she said.

Both Duffey and Schreiber agree that the institute is in uncharted waters as never before have their adjunct professors unionized.

Adjunct faculty members at SFAI said today that they hope negotiations prove fruitful as they feel they have committed to their students, but that their school has not yet committed to them.