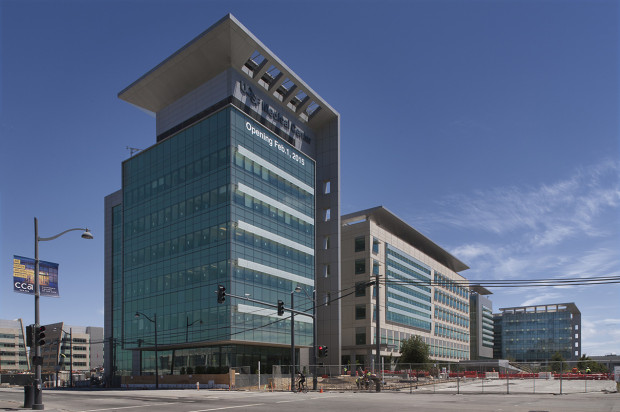 A fleet of autonomous mobile robots programmed to transport items such as meals, medications, linens and lab specimens will begin operating around the clock Sunday when the new University of California at San Francisco’s Medical Center at Mission Bay opens to the public.

The 25 tireless robots at the new medical center, created by Aethon Inc. which cost the hospital about $6 million, are among the largest fleet working to assist a medical complex in the world.

According to Aethon Inc., the robots, which are already being used in over 140 hospitals around the world, can seamlessly navigate around obstacles and even ask people to move out of the way.

Each robot can carry up to 1,000 pounds and is expected to traverse about 12 miles inside the medical center each day once the building are fully operational.

Dr. Seth Bokser, UCSF’s associate chief medical officer and a pediatrician, said during a tour of the hospital today that these robots are an integral part of the hospital’s “staff.” They will allow clinicians to stop spending time moving supplies around the hospitals and create more time to focus on providing medical care, he said.

Bokser said the robots, which can even pick up medicine at the pharmacy station and drop it off to specific nurses by gathering biometrics prior to permitting access, represent one of the many ways that medical center aims to use information technology to be more efficient, provide better medical care to patients and create the optimal healing environment.

Bosker said creating a relaxing and healing environment for the center’s 289 beds was among the top priorities for the new medical center.

Through patient-facing interactive technology, Bosker said he believes UCSF is “moving the culture towards shrinking the health literacy gap.” He said that most patient rooms in the medical center come equipped with a tablet and a large screen monitor that allow the patients to connect and keep up to date with friends, family, coworkers and classmates outside the hospital, reducing stress and anxiety for the patient.

In addition to Internet access and a variety of entertainment options, patients can also view scans, x-rays or lab results so they can be more informed about their health.

Bosker said tele-health technology at the hospitals allow care to be virtually brought to the patient’s side.

Patients at the medical center will also be able to communicate their specific needs, whether it be a glass of water or a medical emergency, to hospital staff through a new secure clinician communication system.

San Francisco Mayor Ed Lee was among those who gathered at the hospital today to celebrate the transformation of the Mission Bay site from an underused rail yard to a state-of-the-art medical center.

Lee said the modern medical complex will compliment the groundbreaking research that is being done at UCSF, which draws people from all over the world to San Francisco.

Lee said UCSF is driving innovation, which in turn is creating “a new gold rush in San Francisco,” leading to the city’s record-low unemployment rate of 3.8 percent.