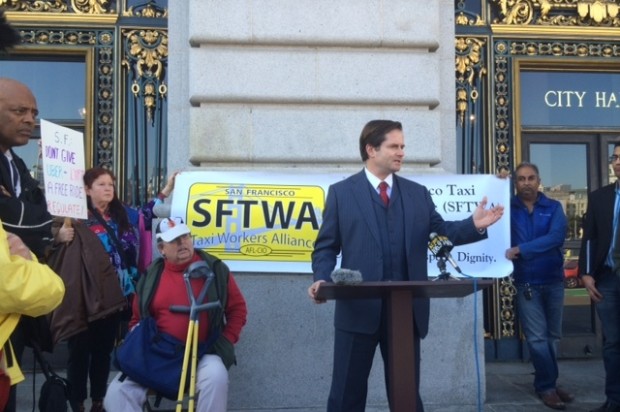 A group of taxi drivers and their supporters gathered outside San Francisco City Hall this afternoon to urge the San Francisco Board of Supervisors to hold transportation network companies such as Uber and Lyft to the same high standards as taxi companies.

Members of the newly formed San Francisco Taxi Workers Alliance, gathered on the steps of City Hall to voice their concerns not only about their jeopardized livelihood as taxi drivers, but also to address the safety risks and inaccessibility of services provided by transportation network companies in San Francisco.

The alliance, which formed in August with an official charter established in November, is currently about 600 members strong, according to Barry Korengold, an executive board member of the alliance.

Korengold said he has been driving taxis in San Francisco for over 25 years and before that, he drove taxis on the Peninsula for eight years.

Korengold said the alliance plan to address the board of supervisors at their next meeting and will urge the supervisors to regulate the transportation network companies, also known as TNCs, by issuing permits and collecting regulatory fees.

According to Korengold, the alliance has counted roughly 10,000 transportation network company drivers from all over the state operating in San Francisco.

The TNCs operate by connecting travelers with drivers using personal vehicles through a smartphone app.

Korengold said that unlike taxi drivers, who have to pay the city $250,000 for a medallion, the transportation network companies don’t offset the city’s costs, such as repairing wear-and-tear on the city’s roads, for its drivers to provide their service.

“They made a backroom deal”, Korengold said, referring to an ex parte agreement which he says allowed Uber and Lyft to operate unfettered for the first nine months of the California Public Utilities Commission’s rulemaking proceeding.

Korengold said he feels this nine-month window allowed those companies “to flourish and expand exponentially, unfairly competing with the highly regulated taxi industry.”

Korengold said consumers and anyone on the road in San Francisco would be shocked if they knew how much of the city’s congestion was caused by the thousands of transportation network vehicles on the city’s roads, which drive around the city until they are called on to pick up passengers.

He said he hopes the board of supervisors will require transportation network drivers’ vehicles to have unique numbers printed on them so the public can identify them more readily, similarly to taxis.

Korengold also alleged that Uber Technologies is “helping facilitate insurance fraud” by allowing its for-hire drivers to utilize the driver’s private insurance plans without reporting livery to the insurance companies.

To drivers working for companies such as Lyft and Uber, Kincaid said they “cannot assume that personal/private auto policy will cover them for livery,” and that it is illegal to conduct livery under such insurance plans.

Kincaid said, however, that the California Public Utilities Commission is assigned to regulate the transportation network companies.

Bob Planthold, a disabled community activist, also attended the news conference outside City Hall today and expressed his belief that transportation network companies need to make services available to all, including those with disabilities or service animals.

He also expressed concern that if taxi companies were to be replaced by transportation network companies, anyone without a smartphone would be unable to call for a car to pick them up.

Attorney Christopher Dolan, who is representing the family of Sophia Liu, a 6-year-old girl who was fatally struck by an Uber driver on New Year’s Eve in 2013, spoke to the crowd assembled at City Hall today and said the San Francisco Board of Supervisors has a role in overseeing the transportation network companies. He said the board can regulate, license and tax them.

Dolan said Uber’s practice of surging prices when people need transportation the most is unacceptable and can be regulated in the same manner that prohibits taxis from raising their prices when it rains.

Dolan said the CPUC mostly regulates insurance, background checks and some safety aspects, but the rest is the responsibility of the board of supervisors and the San Francisco Municipal Transportation Agency.

“We don’t even know how many are out there,” Dolan said, adding that a livery license would allow drivers to be monitored and regulated.

Dolan is currently seeking damages on behalf of the Liu family from both Uber and an Uber driver.

Dolan alleges that the driver was viewing or interacting with his smartphone app for the company when the collision occurred.

Uber issued a statement following Sofia Liu’s death, saying that the driver was not responding to a fare at the time of the collision.

Dolan said today that Uber has not yet handed over documents related to that claim.

Dolan said consumers need to be protected and that the San Francisco Board of Supervisors need to act “before more people get killed” and that they need not be afraid of these “corporate terrorists.”

San Francisco District Attorney George Gascon said in December that an investigation into Lyft and Uber’s “misleading” statements, representations and business practices started about a year prior and while Lyft has worked with law enforcement since then to come under compliance, Uber has not shown that same willingness.

Gascon said that a complaint against Uber was filed in San Francisco Superior Court in December.

Both the Los Angeles County and San Francisco district attorneys expressed their concern for consumer safety, stating that Uber has engaged in a variety of business practices that violate California laws designed to protect the public.

Gascon said consumers who are considering taking a ride in an Uber should “be aware” as the company has provided its customers with a “false sense of security.”

Gascon said the Uber lawsuit would send a signal to companies that they can’t ignore the public’s safety.