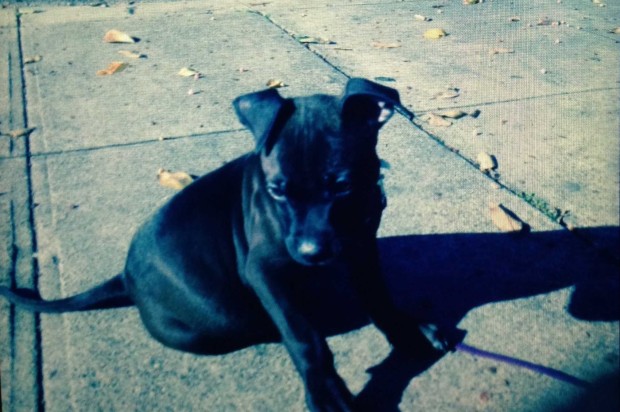 The San Francisco Police Department released photos today of a man suspected of punching another man in the face before stealing his pit bull puppy on a bus in the city’s South of Market neighborhood early Thursday morning.

Police said the 18-year-old victim was riding the bus with his 4-month-old puppy near the intersection of Sixth and Mission streets shortly before 2:40 a.m. Thursday when a man approached him, according to police.

The suspect punched him in the face and then grabbed the victim’s puppy, named “Chester,” before exiting the Muni bus with it, police said.

Police have released photos of the small, dark-colored pit bull puppy as well as photos of the suspect obtained from Muni video surveillance footage.

According to police, the suspect is a black man in his 20s, standing about 5 feet 9 inches tall. He was last seen wearing a black winter vest with a dark gray hooded sweatshirt underneath.

In the photos taken from Muni surveillance footage, the suspect is wearing a black baseball cap, light-colored pants and light-colored shoes.

No arrests have been made in connection with the assault and robbery, according to police.