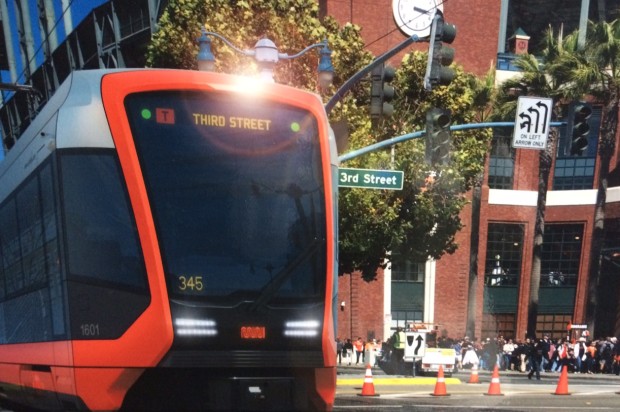 Members of the San Francisco Municipal Transportation Agency and the Board of Supervisors came out this morning to express their support for the mayor’s decision to increase the number of trains in the new fleet.

Lee said the new 215 trains will be a big boost to the city’s transportation infrastructure and wouldn’t be possible without the $500 million transportation bond measure approved by voters in the November election.

To fund the expansion, the SFMTA will seek up to $153 million in California cap-and-trade funds as well as $57 million in funding from the SFMTA board of directors.

The Metropolitan Transportation Commission is expected to partner with the SFMTA to guarantee funds to bridge the gap in the event that the request for cap-and-trade funds is not met.

According to the mayor’s office, there is also the possibility that the city will choose to purchase another 45 light-rail vehicles, bringing the total to 260.

There are currently 150 light-rail vehicles in service in San Francisco, according to SFMTA spokesman Paul Rose.

Rose said that riders can look forward to riding the new red-colored vehicles with longitudinal seating, similar to New York City’s subway cars, by the end of 2016.

Rose said San Franciscans have provided feedback on what they want to see in a new fleet and that many people wanted to see bicycles permitted on board and the trains were designed with them in mind.

Rose said the SFMTA board would need to change their policy to allow bicycles since they are not currently allowed on Muni light-rail vehicles.

Nolan said the existing vehicles have failures every 5,500 miles, but that the new trains are projected to travel up to 59,000 miles before the first needed repair.

Nolan also said the new light-rail vehicles will have six moving parts in the doors, in comparison to the current fleet, which has around 200 moving parts in each set of doors. He said the change would greatly reduce the need for repairs.

San Francisco Supervisor Scott Wiener stood beside the mayor today, saying he knows how frustrating it is for San Franciscans who are trying to get to work but cannot get on light-rail vehicles because they are at capacity.

The supervisor said the decision to not only replace, but also significantly increase the light-rail vehicle fleet, is “incredibly exciting” and will meet the demands of an ever-growing city.

“Muni is completely over capacity,” Wiener said. “We have to add capacity. If we do not increase significantly the number of people who can ride this system around San Francisco, we’re going to see more cars on our streets, more congestion, more accidents, more pollution.”