A Fine Balance Between Dark And Light: Blithe Spirit 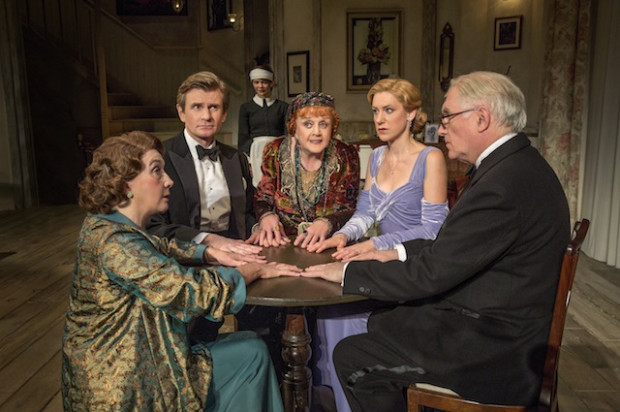 Blithe Spirit, Noel Coward’s classic comedy about marriage, mortality, and spirits has landed in San Francisco for a brief twelve night run, featuring Angela Lansbury in the role that won her a fifth Tony award in 2009.

Let’s be honest. This revival could co-star the cast of “Saved By the Bell” and it would still be worth seeing because that’s Angela-Frickin’-Lansbury up there, she’s 89 years old, and she’s amazing. But, thankfully, the cast proves to be much better than a Screech and Slater production.

Lansbury’s role is really a supporting one, but her character, Madame Arcati, is the comedic lead upon which everything else follows. The entire play takes places in the 1940s English countryside home of the Condomines. Charles is a mystery writer working on a new novel about a homicidal medium. Ruth is his proper English wife. Second wife, to be exact, and the play opens as they discuss the evening’s upcoming dinner party/seance. Neither believes in the possibility of actual spiritual contact, but oh, won’t it be a hoot to give it a shot?

The guests include another proper English couple–Dr. and Mrs. Bradman–and, of course, Madame Arcati, the medium who tools around town on a bicycle, and has a fondness for cucumber sandwiches and a dry martini.

While the evening is supposed to all be in good fun, it soon turns out Madame Arcati is no charlatan, and the ghost of the first Mrs. Condomine, Elvira, materializes…But only Charles can see her.

Lansbury is delightful in every scene she’s in, but the highlight is certainly those times that Madam Arcati must go into a “trance.” This trance usually accompanies a recording of Irving Berlin’s “Always,” and always involves a solo dance that…well, is a little hard to describe, but oh so perfectly executed.

Charles Edwards–perhaps best known in the States as Lady Edith’s baby daddy on “Downtown Abbey”–plays Charles as both completely freaked out and helplessly entranced. Jemina Rooper is the ghostly Elvira. Rooper is no stranger to playing ghosts, having also played one on the British series “Hex.” She’s a small spitfire of a spirit, and you can tell why, if presented with a choice between her and the new Mrs. Condomine, Charles might go for the ghost.

Charlotte Parry’s Ruth Condomine is ironically and appropriately icy as the living wife, and she gets to stretch and play a more comedic side of her character in the second act. And special mention must be made of Susan Louise O’Connor’s excellent physical comedy in the role of the Condomines’ ditsy and manic maid, Edith.