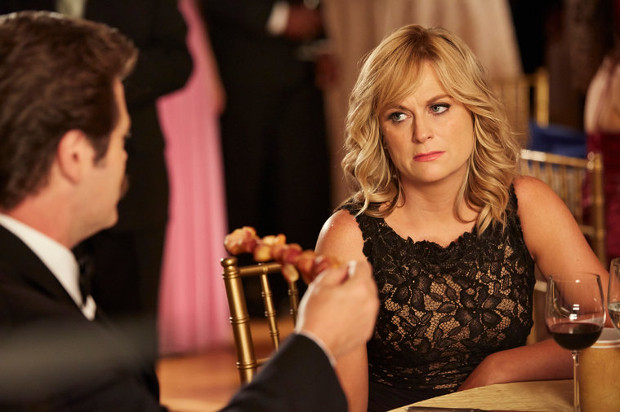 Well, The Golden Globes happened last night and The Winter TCAs (what your favorite TV critics has been tweeting about the past week) have been going on, but what’s on the air this week?

Monday, January 12
Eye Candy (10pm, MTV, series premiere)
Based on the young adult book by Goosebumps author R.L. Stine, it features young person of note Victoria Justice as a tech genius who is being cyber-stalked by one of her online dates. Also, it features cyber police and hackers who are on the trail of a serial killer in Manhattan. If this show isn’t just an hour of Victoria Justice saying “she’s in,” then this show is a bust.

Tuesday, January 13
Parks & Recreation (8pm, NBC, season premiere)
Glad to see NBC treating the last flicker of light in its comedy line-up with the respect it deserves by burning off the episodes of the final season two at a time Tuesdays, until there is nothing left but episodes of Mysteries of Laura. Remember Pawnee. First in friendship, fourth in obesity.

Wednesday, January 14
It’s Always Sunny in Philadelphia (10pm, FXX, season premiere)
The venerable sitcom comes back for its tenth season of awful people doing awful things. And while it’s a little long in the tooth, by no means has the show worn out its welcome (yet, at least).


Man Seeking Woman (10:30pm, FXX, series premiere)
Jay Baruchel (along with Eric Andre) star in this surreal romantic comedy about looking for love, but in a reality where rain clouds exclusively dump on you, your ex-girlfriend is dating Adolf Hitler, and you’re going on a blind date with a literal bridge troll.

Thursday, January 15
The World Dog Awards (8pm, CW)
Hot on the heels of the Golden Globes, George Lopez hosts the prestigious World Dog Awards on the (Golden Globe winning) CW. Where the nominees for best dog-centric film of the last 25 years include Air Bud, Turner and Hooch, Beethoven, Marley and Me, and Beverley Hills Chihuahua. It looks like it’s gonna be that kind of party.

Friday, January 16
12 Monkeys (9pm, SyFy, series premiere)
Terry Gilliam’s 12 Monkeys is next in the series-izing of movies form the 90’s and ‘trying to tell the same story in twelve hours that took the movie two hours to tell.’ Although Fargo proved that we shouldn’t be quick to judge, and From Dusk Til Dawn proves that it can at least be fun. Maybe that’s the spectrum we are working with.

Helix (10pm, SyFy, season premiere)
“The CDC does not run!” The disease-thriller executive produced by Battlestar Galactica’s Ronald D. Moore moves the location from the Arctic to what looks like a Martha’s Vineyard of the damned by way of Resident Evil 4.

Saturday, January 17
Whitney (8pm, Lifetime)
Oh, Lifetime. When the tabloids run out of obituaries for dead celebrities, dead celebrities will end up on Lifetime. Angela Bassett makes her directorial debut with the biopic of the adored songstress with Yaya DaCosta as Whitney Houston and Arlen Escarpeta as Bobby Brown.

Sunday, January 18
Grantchester (10pm, PBS, series premiere)
PSB has its Sunday British game on lock, with this new offering under the Masterpiece imprint. Featuring a young priest and a cop who solve murders in 1953.