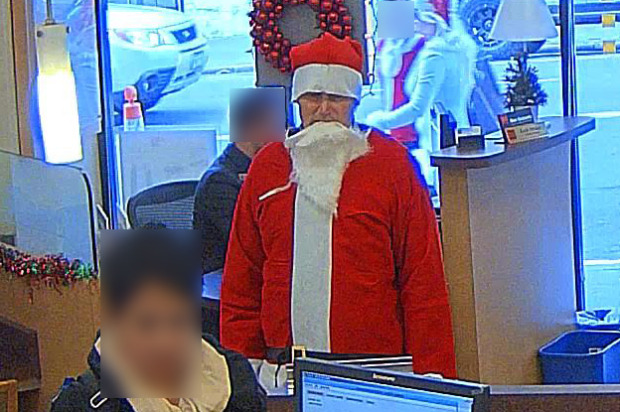 San Francisco police have released photographs from video surveillance footage of a man in a Santa suit robbing a bank in downtown San Francisco on Saturday during the citywide holiday pub crawl Santacon, in which hundreds of people dress up like Santa Claus.

In the photographs, the Santa imposter can be seen wearing a red and white Santa suit with a Santa hat, a black and gold belt and a disheveled fake white beard.

Police said that the suspect remains at large after entering a bank in the 400 block of Sutter Street, shortly after 1 p.m. on Saturday.

The bank is located about one block north of Union Square where Santacon participants congregate prior to the annual bar crawl.

The man in the Santa suit handed the teller a demand note and claimed to have a gun, although no gun was seen, according to police.

The teller complied with his demands and handed him cash, police said.

After receiving the money, the suspect left the bank and fled on foot, according to police.

The suspect is described as a white man between 40 and 50 years of age, standing about 6 feet tall.

No arrests have been made and anyone with information about the suspect is urged to contact San Francisco police and may do so anonymously by calling (415) 392-2623 or may text a tip to 847411 with “SFPD” in the text field followed by the message.