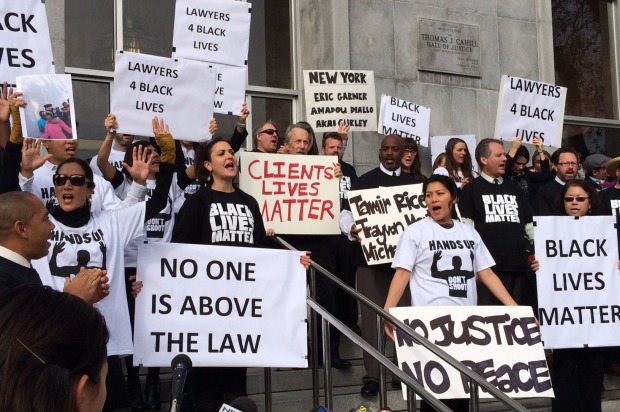 Standing on the steps outside the San Francisco Hall of Justice this afternoon, dozens of attorneys, many from the San Francisco Public Defender’s Office, gathered together to call for racial justice in the judicial system.

San Francisco Public Defender Jeff Adachi said today that he wants to see the Constitution’s Bill of Rights enforced in communities of color.

Dozens of attorneys showed up for today’s demonstration wearing black and white T-shirts with “Black Lives Matter” or “Hands Up Don’t Shoot” printed on the front and “SF Public Defender” printed on the back. Many held signs with slogans such as “Clients’ Lives Matter” and “If The System Won’t Indict Cops Then We Indict the System.”

Adachi urged Bay Area judges, prosecutors and defense attorneys to uphold the law and not allow racial discrimination in the courtrooms.

He applauded public defenders in Alameda, Solano, Santa Clara, Contra Costa and Marin counties who have also spoken out or held rallies today to highlight the high rate of arrests and convictions for persons of color.

Adachi said that he reached out to public defenders across the country and many, including those in Los Angeles and New Orleans, held demonstrations today.

Some public defenders offices chose not to participate, possibly out of fear of retribution, Adachi said.

“To not get involved in what is happening is wrong,” Adachi said today.

Signs held up by attorneys in the crowd today named those who had been killed by police in the Bay Area, including Alex Nieto, Oscar Grant III, Andy Lopez, Asa Sullivan, and Ken Harding, among others.

Cepheus “Uncle Bobby” Johnson, the uncle of deceased Oscar Grant III, also attended the demonstration today and said it hurt to see the continuous mistreatment of people of color.

Johnson said he was touched to see public defenders and attorneys come out today and acknowledge the broken the judicial system.

Hite said today that the committee plans to release a list of steps, possibly in the coming weeks, that can be taken to further improve the city’s justice system.

According to the San Francisco Controller’s Office’s 2013 County Jail Needs Assessment, while only about 6 percent of San Francisco residents are black, black individuals make up 56 percent of inmates in the city’s jail.

According to San Francisco Public Defender’s Office communications and policy assistant Tamara Barak Aparton, the Racial Justice Committee and the Quattrone Center engaged in the study in hopes of learning whether race is a factor in bail decisions, decisions to hold persons in custody, plea offers, outcomes and severity of sentencing.

Researchers also hope to discover whether the ethnicity of the judge, prosecutor, and defense attorney are factors in case outcomes, if minority defendants are more likely to be arrested or detained for certain offenses and if there are policies, strategies and procedures that might help address disparities.