Preaching To The Choir: Kinky Boots 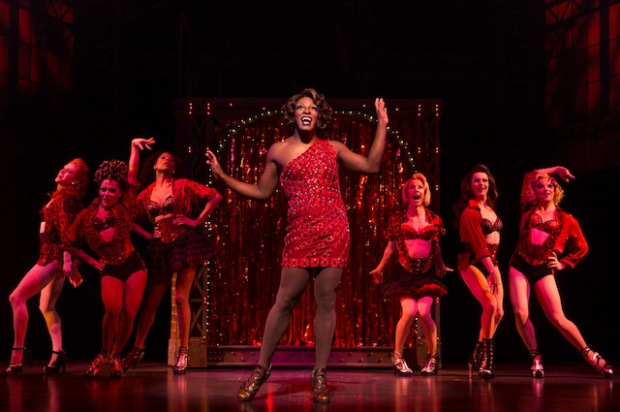 Kinky Boots, based on the 2005 movie, with a book by Harvey Fierstein and music and lyrics by Cyndi Lauper, tells the story of a family-run shoe factory in Northampton, England that is facing changing times, and possible bankruptcy. Son, and only heir, Charlie (Steven Booth) hopes to start a new career in London, but returns home upon the death of his father. A chance meeting with a drag queen named Lola (Kyle Taylor Parker)–who accidentally breaks a shoe over Charlie’s head–gives Charlie the idea to revamp his shoe biz, creating quality women’s boots for men, or more specifically, drag queens. (Although the insistence that no woman’s shoe can hold a man’s weight is, well, specious.)

Is there a musical called Where Do I Belong? or Who’s My True Family?, because I have yet to see a musical that isn’t essentially about one or both of those two things. Kinky Boots is no different, and in fact has one song, “Charlie’s Soliloquy” that opens with the lyrics, “Do I belong here?” That would seem a ripe topic for satire, but Lauper’s lyrics are completely earnest, as is too much of the musical.

Other numbers fair better. Lola’s introduction, “Land of Lola,” complete with backup dancers, definitely charged up the audience. Lindsay Nicole’s solo “History of Wrong Guys” includes some nice bits of prop comedy. And the second act ensemble number, “In This Corner,” involving a slow-motion boxing match, is clever and original.

It’s when the show slows down to get serious, such as when Lola, nee Simon, tells his “it gets better story,” and pleas with an ignorant factory worker to accept him as he is, that it begins to suffer under the weight of its own earnestness. There’s nothing wrong with the message, of course. It’s just that in SF, they’re definitely preaching to the choir.

Kinky Boots is at its most fun when Lola and her energetic band of colorful drag queens (The Angels) take over the stage. The dancing, at times, borders on the gymnastic, and Kyle Taylor Parker’s got a great voice and a great pair of legs. I’m glad this musical exists, happy it was a hit, but really hope it gets some more play in cities less likely to pack the opening house with local drag stars. They need it more than San Francisco does.