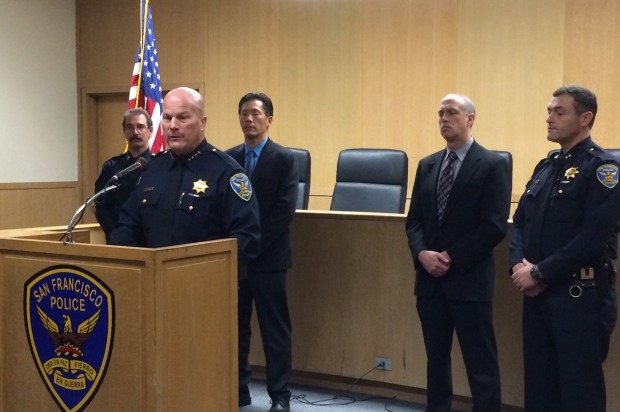 The conviction of Sgt. Ian Furminger, 47, of Pleasant Hill, and Officer Edmond Robles, 47, of Danville, came after what Suhr said was a thorough and comprehensive investigation by the office of U.S. Attorney Melinda Haag and the Federal Bureau of Investigations.

Suhr expressed his disapproval of the officers’ behavior and said that there is no place for “a dishonest cop” in the San Francisco Police Department, and that there shouldn’t be a place for that behavior in any police department.

While both Furminger and Robles were suspended without pay from the department since their arrest in February, Suhr said today he is seeking immediate termination of both officers. He said he expects the police commission will act quickly in order to make that happen.

Furthermore, Suhr said the San Francisco Retirement System will receive the necessary paperwork to terminate any future pension consideration, as appropriate, for the two officers.

He said Furminger and Robles not only betrayed San Franciscans, but their colleagues at the department.

Officer Robles was convicted of five counts: two counts of wire fraud, conspiracy against civil rights, conspiracy to commit theft and theft of more than $5,000 worth of property from a federally funded program.

Both were acquitted of two counts each of defrauding the citizens of San Francisco and one count of conspiracy to distribute controlled substances. Furminger was acquitted of a charge of extortion that only he faced.

Additionally, the jury deadlocked over a theft charge.

In order to bolster accountability at the police department, Suhr said today that there are ongoing ethics training classes and extensive supervision of officers, plus updated guidelines for officers who are conducting plainclothes operations.

Suhr said the verdict allows both men to be held accountable for their actions and said, “that only they know why they did whatever they did.”

The verdict was read in the court of U.S. District Judge Charles Breyer at around noon today, following a nine-day jury trial, according to the office of U.S. Attorney Melinda Haag.

In addition to cash, the officers took valuables such as electronic devices and gift cards, without booking the items into evidence or including them in police reports, thus depriving suspects of due process of law, according to Haag’s office.

FBI Special Agent in Charge David J. Johnson said today that this serves as a reminder that “Corruption — with or without a badge — is unacceptable, and today’s verdicts are a reminder that no one is above the law.”

Robles’ attorney, Teresa Caffese, stood outside the federal courthouse shortly after the verdict was announced today and expressed her disappointment in, but respect for, the jury’s decision.

Caffese said Robles’ family is also disappointed with the verdict.

She said Robles has been with the department for over 23 years and had no disciplinary problems prior to his arrest.

She said her office would be conducting further investigation regarding the case prior to Robles’ sentencing on Feb. 23, 2015, but she didn’t say whether or not her client planned to appeal the jury’s decision.

Vargas, 46, of Palm Desert, was charged in the same indictment as Robles and Furminger in February, but pleaded guilty to four counts on Oct. 21 and agreed to testify against his former colleagues.

He was the chief prosecution witness against Robles and Furminger.

Caffese said she doesn’t think the jury believed everything Vargas said, since Robles was found not guilty on some of the charges filed against him.

Caffese said both officers are out of custody on bail until their sentencing in February, when they could face sentences between five and eight years in prison.

San Francisco Public Defender Jeff Adachi said today that the victims of the corrupt members of the San Francisco Police Department received a measure of justice with this verdict.

Adachi said, “the jury sent a clear message that if police break the law, they are going to be held accountable.”

He said the ruling comes at a time when police accountability is being fiercely debated across the country and the world.

The public defender noted that recent national cases in which police conduct has been questioned, such as Michael Brown’s case in Missouri and Eric Garner’s case in New York, won’t have the benefit of a jury trial, but this case did.

Adachi said the federal government stepped in and provided an independent investigation resulting in convictions of “outrageous” misconduct.

Adachi said he first learned about possible police misconduct from clients who reported being mistreated by officers at the Henry Hotel on Sixth Street in 2009.

Following these allegations, Adachi’s investigators obtained a year and a half worth of video surveillance footage that depicted officers conducting illegal searches at the Henry Hotel.

He publicly released much of that footage on YouTube to ensure that the citizens would be able to view it and that justice would be served.

Adachi said only at that point did the courts take notice.

“The sad part of this is that we had been hearing these complaints for years,” Adachi said.

He said this case isn’t the only instance of reported police misconduct in San Francisco, citing related incidents coming out of the Mission District and SoMa neighborhood, which remain under investigation.