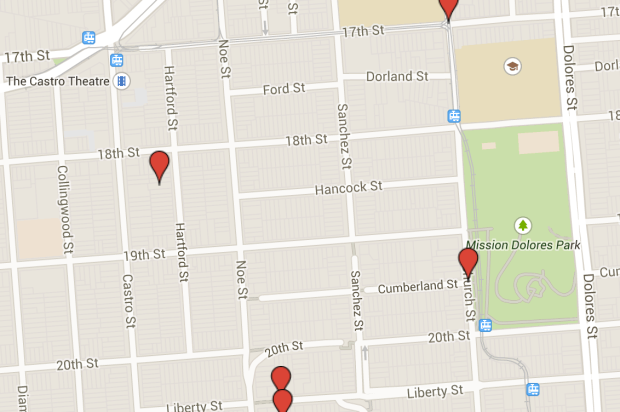 San Francisco fire crews doused a car fire in the city’s Dolores Heights neighborhood early this morning, fire officials said, not far from the location of four other car fires on Wednesday.

Firefighters responded to a report of a car fire at 126-132 Hartford St. in San Francisco at 3:02 a.m., a fire dispatcher said.

The cause of the fire is still under investigation, but the dispatcher said arson teams have responded to the incident.

He could not say whether the fire was related to four others nearby that were reported on Wednesday.

Fire crews responded to a car fire in the area of Cumberland and Church streets around 4:10 p.m. on Wednesday, said San Francisco police Sgt. Monica Macdonald.

About 35 minutes later, a truck fire was reported at 17th and Church streets, four blocks north of the first blaze, Macdonald said.

Around 5:10 p.m., another car fire was reported at Liberty and Rayburn streets, less than a half a mile away from the second blaze, Macdonald said.

An hour later, officers responded to a fourth car fire in the unit block of Rayburn Street near Liberty Street, according to Macdonald.

All of the fires on Wednesday are being investigated as suspected arsons, Macdonald said.