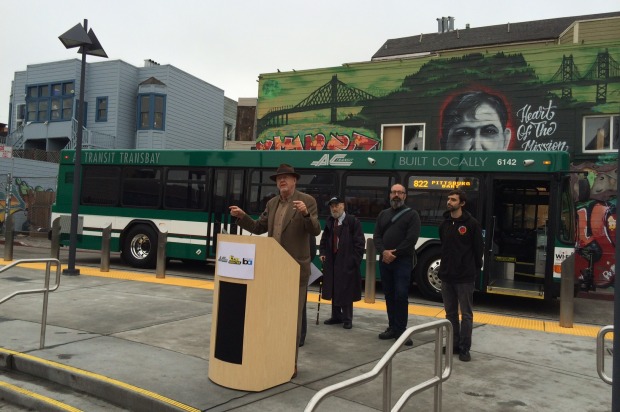 Transbay commuters in the late night and early morning hours will be able to more swiftly get to and from the East Bay and San Francisco on the weekends with a new pilot program launched today by BART and Alameda-Contra Costa Transit.

The program not only introduces an additional all-nighter bus line that expands into East Contra Costa County cities, but also increases the frequency of overnight bus lines already in service.

Harper said that nightlife in both San Francisco and Oakland are growing rapidly and he noted the significant contribution of nightlife on both cities’ economies.

The result of an increase in nightlife has led to residents asking for more frequent, safe and convenient transportation options across the Bay, leading BART and AC Transit to team up and create a new line.

Among those who are excited about the increase in late-night service is 25-year-old Berkeley resident Dani Silberstein, who works at the ThirstyBear Brewing Company in San Francisco’s South of Market neighborhood.

Silberstein said today that he often finishes up at work after BART service ends for the night around midnight.

Silberstein, who does everything from serving to marketing at the brewery, said he doesn’t have a car and relies solely on his bicycle and public transportation to get around.

He said many times he has waited up to an hour for a late-night transbay bus back to Berkeley.

“After a long shift at work, I just want to get home,” Silberstein said.

He is hopeful that the pilot program will address issues such as unpredictable arrival times and overcrowded coaches that can lead to aggressive confrontations on the sidewalk while waiting for the bus or between passengers who have had too much to drink.

The new bus route, AC Transit line 822, will take passengers from the 24th St. Mission BART station to Pittsburg/Bay Point, stopping at all San Francisco BART stations and the Transbay Terminal before heading across the Bay Bridge.

In the East Bay, the 822 bus line will stop at 14th Street/Broadway and Rockridge BART in Oakland, then the BART stations in Walnut Creek, Pleasant Hill and Pittsburg/Bay Point, according to BART access coordinator Mariana Parreiras.

The new route will run every 30 minutes on Saturday and Sunday mornings from 1 a.m. to 2:30 a.m., Parreiras said.

The existing AC Transit line 800, which serves late-night riders traveling between San Francisco and Richmond BART, and AC Transit line 801, which serves late-night travelers between Oakland and the Bay Fair BART station, will also have increased frequency between 12:30 a.m. and 2:30 a.m., with buses running every 20 minutes instead of every 30 minutes, Parreiras
said.

Those two lines will continue to run nightly from 12 a.m. to 5 a.m.

Parreiras said for now, buses are the only late-night option since power to the BART trains has to be turned off for maintenance.

BART contributed $200,000 from its operating budget and about $100,000 is expected to come directly from fares from the new service.

BART board director Rebecca Saltzman said the pilot program will help evaluate the demand for late-night transportation service and may be extended with permanent funding if warranted.