Appealing TV: Christmas Specials As Far as the DVR Can See, Bible Movies on Lifetime, and Peter Pan Live!

A Very Grammy Christmas Christmas in Rockefeller Center Food Network Special Christmas How Murray Saved Christmas One Child Peter Pan Live! Robot Chicken Sleepy Hollow The Arrow The Flash The Heart She Holler The Librarians The Red Tent The Taste The Women of the Bible Toy Story That Time Forgot by Paolo Sambrano | December 1, 2014 9:52 am | in Culture | 1 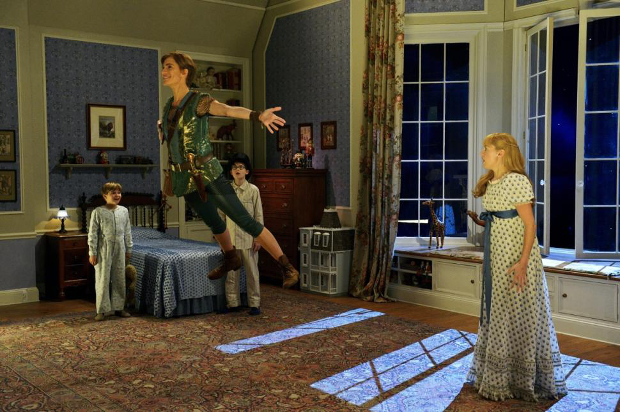 We made it through Thanksgiving! And after marinating in premature Christmas advertising for the past month, our holiday timelines finally match up, and now we’re getting nonstop Christmas songs on KOIT, an uptick in Mariah Carey’s All I Want for Christmas plays on Youtube, people talking about why Die Hard is the best Christmas movie ever, and having FOX News renew their own self-projected, self-persecuted War on Christmas. But always remember the true reason for the season, and that is throwaway holiday specials!

Monday, December 1
Sleepy Hollow (9pm, FOX, fall season finale)
One of the things Sleepy Hollow had going for it in its freshman season was a thirteen episode season, which allowed it to propel through plot at a supersonic pace. Aside from the season two premiere and the last two episodes, I literally felt I have been watching the exact same episode of Sleepy Hollow for weeks now. And I knew this stagnation was going to happen when they initially announced an expanded episode order for season two for Sleepy Hollow. Perhaps when the show comes back in the new year, that’s when season two will actually start?

The Flash vs. The Arrow (8pm, The CW)
The Flash has been pretty strong in its maiden season, and its total embrace of superhero sincerity is a great counterpoint to Arrow’s more brooding themes. Also, Grant Gustin’s performance as Barry Allen/The Flash has totally out Peter Parkered Peter Parker. The Flash crossed over with Arrow in a two-night event which concludes on Wednesday at 8pm (Arrow’s time slot). I can think of a few people who will be profoundly disappointed if this crossover wasn’t just a two-night shirtless salmon ladder* off between Grant Gustin and Stephen Amell.

*The real genius in Arrow is getting people to say ‘salmon ladder’ during the American Ninja Warrior offseason.

Wednesday, December 3
Christmas in Rockefeller Center (8pm, NBC)
It’s the tree lighting ceremony at Rockefeller Center, Charlie Brown. There will most likely be a rock band performing a rock version of Jingle Bell Rock there in Rockefeller center, although no word if they’ll be out there to try and rock the vote.

Thursday, December 4
Peter Pan Live! (8pm, NBC)
The follow up to last year’s Sound of Music Live! has Girls’ Allison Williams in the role of the boy who never grew up (in a role that has mostly been portrayed by women, put your pitchforks down angry mob. I bet you were one of the assholes who thinks that Spiderman has to only be white). Christopher Walken is Captain Hook, and looks like the supportive but uncomfortable parent dragged into helping out at their kids’ winter play. Thanks to NBC, FOX will be staging a production of Grease in the near-future, and NBC has announced they will be staging The Music Man most likely around this time next year. Soon ABC will just be sticking a camera in a random high school’s production of Our Town, but the cast of Modern Family is in the audience.

A Very Grammy Christmas (9pm, CBS)
Ariana Grande, Maroon 5, Tim McGraw, and Pharell Williams will be performing, but more importantly, it looks like Ariana Grande will be not remaking Brandy and Monica’s Boy is Mine with Jessie J. A bunch of millennials are finally able to exhale.

One Child (9pm, Sundance, miniseries premiere)
Harry Potter’s Katie Leung stars in this Sundance miniseries as an adopted Chinese girl who is compelled to go back to China in order to save the life of the brother she never knew she had. On a reductive continuum of previous Sundance programming, I’m guessing this will be above The Red Road, in or around The Honorable Woman’s power ranking, but all below Rectify.

Saturday, December 6
Food Network Special: Christmas (9pm, Food Network)
You better watch out, you better not cry, you better not pout, I’m telling you why: Bobby Flay is going to challenge you to a standing rib-roast cookoff, and he’s probably just going to add serrano peppers and corn for some bullshit southwestern fare.

Sunday, December 7
The Librarians (8pm, TNT, series premiere)
Before Noah Wyle was killing aliens in Falling Skies, he put in work as the titular librarian on TNT’s Librarian franchise, which were made-for-TV movies which featured Wyle as a librarian who protected strange artifacts. That franchise is being spun-off into a TV show, which couldn’t have been better timing for Wyle as Falling Skies ends next summer. It’s produced by Dean Devlin, who also produced TNT’s Leverage, which means we will be getting quippy, light-hearted adventure fare with wackadoo artifacts-of-the-weeks, secret histories, and globe trotting. Rebecca Romijn stars along with Leverage’s Christian Kane.

The Red Tent (9pm, Lifetime, miniseries premiere)
I’m can’t get a read on Lifetime. I’ve written about their programming for weeks now, and it veers from shoddy biopics about dead R&B singers from the 90’s to shoddy Christmas movies about R&B groups from the 90’s to an internet meme getting its own movie to Sunday’s miniseries premiere of The Red Tent. Ostensibly yes, all the programming is about women. (Technically, Grumpy Cat is a female feline.) Based on the novel of the same name it attempts to inject a real Game of Thrones vibe into your stories from the Old Testament (having Game of Thrones’ Iain Glen in the cast would also help with that). Also having About A Boy’s Minnie Driver star, along with Homeland’s Morena Baccarin leads an air of legitimacy to the precedings. But to those who didn’t go to Catholic school, The Red Tent is about the Old Testament tale of Dinah, daughter of Leah and Jacob. tl;dr: she fell in love with a foreign prince, her brothers murder the prince’s people after forcing them to get circumcisions. This is preceded by The Women of the Bible (7pm, Lifetime) a special about the titular women of the Bible produced by Mark Burnett and Roma Downey, who last year also produced The Bible miniseries which ran on History Channel.

Robot Chicken: The Robot Chicken Lots of Holidays but Don’t Worry Christmas is Still in there Too So Pull the Stick Out of Your Ass FOX News Special (11:30pm, Adult Swim)
The long running, anarchic pop-culture skewing stop-motion animation show rolls out their yearly Christmas special.