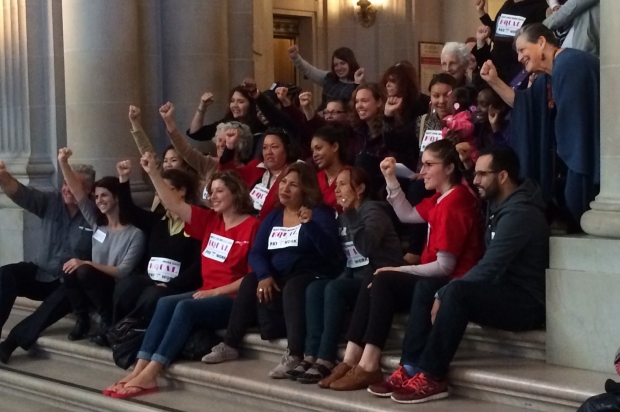 The San Francisco Board of Supervisors voted unanimously today in favor of an ordinance amending the city’s administrative code that will require city contractors to submit an equal pay report and allow for the creation of an advisory board to ensure all city contractors are compensating men and women equally for equal work.

The ordinance will require city contractors and sub-contractors with 20 or more employees to submit an Equal Pay Report regarding compensation paid to employees.

It will also establish the Equal Pay Advisory Board, which will analyze and recommend the best methods of data collection in order to identify wage gaps.

Supervisor Jane Kim said today that the ordinance contains protections “we’ve been waiting on for a long time.”

Kim said the ordinance ensures that anyone who is getting paid with taxpayer dollars in San Francisco receives equal pay for equal work.

Among those in the audience at the board of supervisors meeting who cheered the board’s decision today was 71-year-old Blair Moser, a 40-year resident of the Mission District.

Moser said she expects the ordinance will do a great deal to make sure that all women, including her two daughters and two granddaughters, are treated fairly in the workplace.

The ordinance will allow the city to monitor its contractors, including nonprofit groups, and ensure that they pay their employees equally, regardless of gender, Moser said.

Moser said that unequal pay has, historically, been hard to detect, referencing the Supreme Court decision in Ledbetter v. Goodyear Tire & Rubber Co., which concluded that Lilly Ledbetter received years of discriminatory pay while working at the Goodyear plant in Alabama and didn’t even realize it until someone told her just how much her male colleagues were making in comparison.

In that case, the jury awarded Ledbetter about $3.3 million, but the case was appealed, reversing the verdict, on the grounds that her case was filed too late.

President Barack Obama and the U.S. Congress, less than two years later, passed the Lilly Ledbetter Fair Pay Act of 2009, helping to ensure that those who receive unlawful pay are able to assert their rights under federal anti-discrimination laws.

According to the National Women’s Law Center, the act restored the law and re-established employer accountability for pay discrimination.

But the National Women’s Law Center said that despite anti-discrimination laws, women in the U.S. are paid, on average, only 77 cents for every dollar paid to men. Additionally, African-American women earn only 64 cents and Hispanic women earn only 55 cents for each dollar earned by males.

Supervisor David Campos addressed the audience filled with supporters of equal pay for equal rights saying, “I’m sorry that it took so long to get to this point.”

The board of supervisors voted unanimously in favor of the ordinance.

Supervisor John Avalos also suggested trailing legislation that could require any company applying for a tax break from the city to also report employee salaries to ensure that men and women are compensated equally in those workplaces as well.