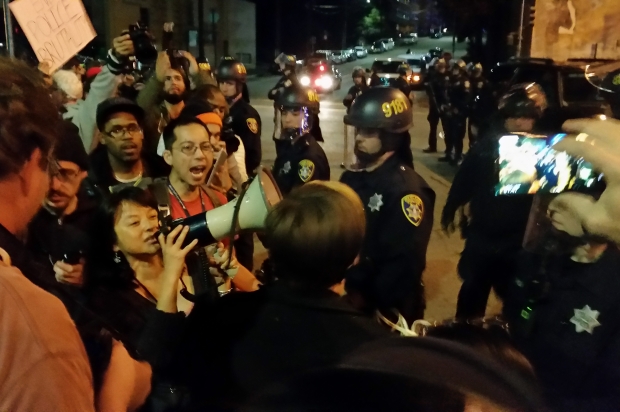 Oakland police have made numerous arrests tonight in a protest that started in the downtown area and continued to Interstate Highway 580 following a grand jury’s decision to not indict a police officer in a fatal Missouri shooting.

About 1,000 people have gathered in the downtown area tonight in response to the grand jury’s decision announced around 6:30 p.m. in the shooting death of 18-year-old Michael Brown by Officer Darren Wilson on Aug. 9 in Ferguson, Missouri.

St. Louis County prosecutor Robert McCulloch made the announcement stating that the jury composed of 12 people determined there was no probable cause to charge Wilson after reviewing hours of witness accounts and law enforcement interviews and examining evidence in the case for the past three months.

One person was arrested for vandalizing a police car and many other arrests were made on the freeway, city officials said.

The protesters started gathering at Frank H. Ogawa Plaza at 14th Street and Broadway earlier in the evening before the announcement chanting, “The whole damn system is guilty as hell. Indict, convict, send the killer cop to jail.”

An estimated 400 to 500 people had gathered at the intersection around 6 p.m., city officials said.

They had yelled, “Hands up don’t shoot” and “Black lives matter.”

Many protesters held a “die-in” in which they laid down on the street with their bodies traced with chalk on the roadway.

After the decision was announced, a large crowd continued to march up Broadway, walked through Chinatown and headed east on Seventh Street.

Small groups of people stayed at the plaza calling for peace in light of the grand jury’s decision.

Protesters attempted to enter Interstate Highway 880 from Seventh and Jackson Streets only to be blocked by police and made their way back to 14th Street and Broadway.

Shortly after 7 p.m., protesters were seen on top of an unmarked police car and spray-painted it at Seventh and Jackson streets.

Dozens of police officers were seen following the marching crowd, some in protective riot gear, as they walked on Broadway to Grand Avenue.

Along the way they broke a window at a Chase Bank at 20th and Webster streets.

While chanting “Justice for Michael Brown,” protesters were also setting off fireworks, vandalizing, setting garbage cans on fire and spray-painting on buildings during the march.

The crowd entered the freeway at MacArthur Boulevard prompting the California Highway Patrol to issue a Sig-alert at 8:36 p.m. for traffic stopped on eastbound and westbound Highway 580.

Hundreds of protesters walked on westbound lanes where CHP officers and vehicles assembled in a line.

About two dozen people were seen climbing over the center divide to eastbound lanes where officers were chasing them down.

Around 9 p.m., cars were seen traveling on eastbound lanes and protesters were being cleared on westbound lanes, where traffic was at a halt.

About half an hour later, traffic on eastbound Highway 580 was being diverted to Interstate Highway 980 and state Highway 24 while westbound lanes were closed at Park Boulevard, according to CHP officials.

Shortly before 11 p.m., both directions of Highway 580 were in process of being reopened, CHP officials said.

The intersections of 14th Street at Broadway and Seventh and Jackson streets were briefly blocked off between 6 p.m. and 8 p.m., police said.

At about 10:40 p.m., protesters holding signs were seen in the area of 14th Street and Broadway near Frank Ogawa Plaza.

Dogwood, a bar located at 1664 Telegraph Ave. and about two blocks away from the plaza, was boarded up in preparation for protesters who may damage the business.

In a statement Rep. Barbara Lee, D-Oakland, said, “My heart continues to go out to Michael Brown’s family and community. I am beyond disappointed in today’s verdict. Like everyone in our community, I am devastated by the senseless murder of yet another black man.”

“I urge protestors to be peaceful and for the police to respect people exercising their First Amendment rights,” Lee said.