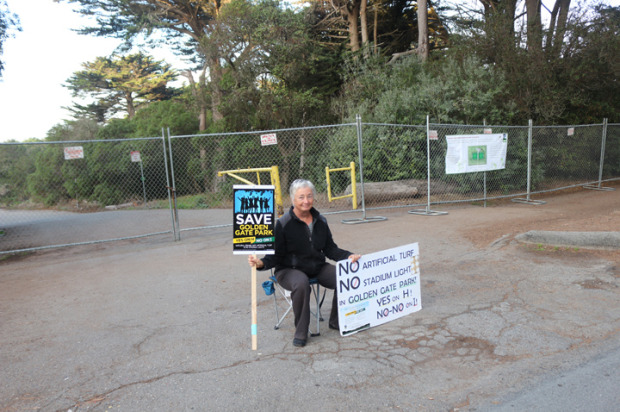 An opponent of a soccer fields renovation project that was the subject of a ballot measure in Tuesday’s election staged a sit-in protest today in response to the start of construction on the fields.

San Francisco Recreation and Parks officials quickly launched construction on the Beach Chalet soccer fields Wednesday after a measure supporting the project appeared to win a solid majority and a measure opposing it looked set for failure.

“Work permits for the project had been issued months ago, prior to the measures being placed on the ballot,” officials with the City Fields Foundation, the project’s chief supporter, said in a statement today.

While construction was postponed until after the election, “the renovation began yesterday morning after it was clear the voters had approved the fields and the outcome of the election would not change,” the statement said.

“We are grateful to the voters of San Francisco for voting to let our kids play,” San Francisco Recreation and Parks spokeswoman Connie Chan said in a statement issued today. “We will now proceed with a much-needed renovation that will allow thousands of kids to play sports in our city.”

Opponents of the project, which included environmental and neighborhood groups, have objected, saying that the ballots had not all been counted when construction started and the election results had not yet been certified.

In addition, at least one legal appeal in a lawsuit filed by the Sierra Club challenging the project’s environmental impact report has yet to be heard, according to a statement from SF Ocean Edge, a group that opposes the project.

One opponent, Kathleen McCowin, who identifies herself as the president of Soccer Parents and Coaches for Grass in Golden Gate Park, staged a protest outside the project today, holding a sign reading “No artificial turf, No stadium light in Golden Gate Park.”

Chan referred questions on the handling of McCowin’s protest to San Francisco police, saying they would be in charge “if and when the protestors threaten personal and public safety in our public space.”

The construction work so far has included the removal of some trees, the installation of fencing and some digging in the fields, according to McCowin. Construction equipment has also been moved into the area.

According to city elections results published today, with all precincts reporting, San Francisco’s Proposition H, which sought to block the project by calling for the athletic fields to be maintained as natural grass, was rejected by more than 54 percent of voters.

Proposition I, a measure allowing for the installation of artificial turf and nighttime lighting of athletic fields in Golden Gate Park, passed with more than 55 percent of the vote.

Those who came out in favor of the turf and lighting project include the San Francisco Chamber of Commerce, the San Francisco Democratic Party, as well as the City Fields Foundation, which is managed by the sons of the founders of Gap Inc., William, Robert and John Fisher, among others.

Those who stood against the artificial turf and lighting include the Sierra Club, Golden Gate Audubon Society and 44 groups that make up the Coalition for San Francisco Neighborhoods, among others.