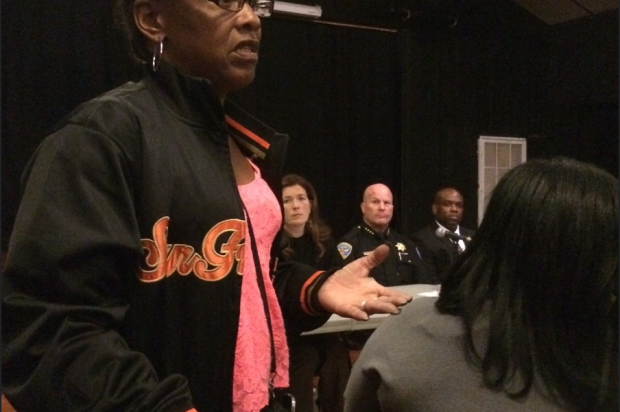 The chief of the San Francisco Police Department held a town hall meeting this evening to discuss the details surrounding an officer-involved shooting that injured an armed man in the Potrero Hill neighborhood’s housing projects on Thursday night.

San Francisco police Chief Greg Suhr held the meeting at the Potrero Hill Neighborhood House at 953 De Haro St., to allow police and members of the community to discuss the officer-involved shooting that occurred in the 900 block of Connecticut Street at about 7:50 p.m. on Thursday, police said.

The town hall meeting was well attended with at least 60 members of the community, including families, police officers and San Francisco Police Commission president Suzy Loftus.

Loftus said she attended this evening’s meeting to listen to the community and see if any police department policies needed to be altered.

She said the officer on leave will likely return to work after 10 days following evaluations.

According to San Francisco police Sgt. Monica MacDonald, plainclothes officers were on violence suppression detail Thursday night at the housing projects on Connecticut Street where a group of males were seen acting suspiciously.

Suhr said that while there were initially more suspects reported, only two suspects were arrested and a third managed to evade police.

A fourth person at the scene was determined to be a witness who was collecting cans nearby for recycling.

When police approached the male suspects, two of the men fled and the third, identified tonight as 30-year-old Jason Seymour, stayed at the scene.

Suhr said that one officer pursued the fleeing suspects while another officer approached Seymour.

The officer shot four rounds, striking Seymour once in his waist area. He was transported to San Francisco General Hospital with injuries not considered life-threatening, MacDonald said.

Seymour had suspected narcotics in his possession, and his firearm has been identified as a .38-caliber Arminius HW 38 revolver that was loaded with six rounds, Suhr said.

Police also detained 51-year-old suspect Ricky Potts, who is suspected of having 3.2 grams of a white rock-like substance believed to be crack cocaine and 2 grams of marijuana in his possession at the time of the shooting, MacDonald said.

The officer involved in the shooting was placed on paid administrative leave per department policy, according to MacDonald.

The third suspect fled the scene and has not yet been detained.

Both Seymour and Potts were arrested and booked, but MacDonald said that Seymour may still be receiving treatment at the hospital.

Suhr said that the surveillance video corroborated both witness and officer statements, but members of the community expressed their skepticism and suggested that police were trigger-happy.

“I’m just giving you what I have right now,” Suhr said to community members asking questions about the exchange between the officer and Seymour.

Suhr said additional video surveillance is in the process of being reviewed.

Bonnie, a woman who live in the projects, expressed frustration with the ongoing violence on the hill, asking Suhr, “Are we safe in our community?”

A woman at the meeting, who identified herself only as a young mother trying to raise her children in safety, asked Suhr “What can we do today to make a change, you know, for the community?”

Suhr said among the most pressing issues in making the community safer was to focus on removing guns from the projects.

Another woman at the meeting suggested that more parents take part in the walking school bus, which walks kids to and from school every day.

Both community members and police agreed that there is too much gun violence in the Potrero Hill projects and that San Francisco’s young people shouldn’t have to be exposed to it.