Appealing TV: The Newsroom, The Game, The Comeback

Doctor Who Getting On Lance Armstrong: Stop at Nothing Masterchef Junior Edition Masterchef: Junior Edition: The Next Generation The 48th Annual CMA Awards The Comeback The Game The Newsroom White Collar by Paolo Sambrano | November 3, 2014 9:26 am | in Culture | 0 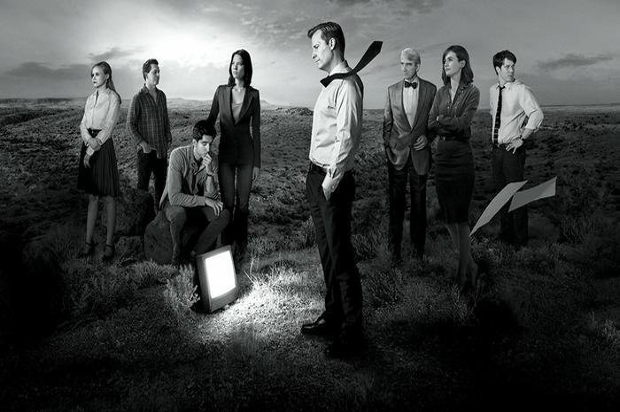 November is great because I get to say I have a bounty of television listings for you because get it Thanksgiving. Also, Tuesday is Election Day, which to me is a weeks-long payoff to Berkeley’s Measure D, in which I get to snicker that Berkeley didn’t want the D (or did want the D, because consent is sexy and democratic) Lastly, it should be noted that ABC’s Manhattan Love Story is the first official show of the 2014 – 2015 television season to be canceled. (And I thought NBC’s Mysteries of Laura or CBS’s Stalker were gonna be the first to go! Quite the opposite really, as both got picked up for more episodes.)

Monday, November 3
Over the Garden Wall (7:00pm, Cartoon Network)
Airing over the course of this week, Over the Garden Wall is Cartoon Network getting into the limited series game. Created by Adventure Time alum Patrick McHale, with voices by Elijah Wood, Christopher Lloyd, and Melanie Lynskey, it’s about two brothers who get lost in the woods, but nothing is as it quite seems.

Tuesday, November 4
Masterchef: Junior Edition: The Next Generation (8pm, FOX, season premiere)
Well, I am kind of impressed with the redundant audacity of the subtitle of the second season of the junior version of the non-screaming version of the Gordon Ramsay cooking competition show. Gordon Ramsey encouraging children is worth the price of admission, frankly. Maybe watching future Yelp reviewers and lifestyle editors of America will be enough to take your mind off that your own cooking skills peaked at “setting the kitchen on fire while trying to microwave a Lean Cuisine.” (Sidebar: I much prefer this in the 8pm slot before New Girl/Mindy Project versus original Tuesdays at 8pm show Utopia, which was moved to the Friday Night Death Slot before just being outright canceled)

Wednesday, November 5
The 48th Annual CMA Awards (8pm, ABC)
For the CMA Awards, it is country music’s biggest night. For people who say they listen to everything but country it is just another Wednesday. But honestly, who still wants to be associated with people with such myopic tastes? And what is “everything” anyway? Their “everything” is about as “everything” as an everything bagel. And if we’re being honest with ourselves, the country that is getting airplay nowadays is as much “country” in the way that Monsanto grain is actual grain. (Exhibit A, Taylor Swift’s new album, which is just straight-up pop) Nashville’s Connie “Tami Taylor Forever” Britton will be showing up for the synergy slam dunk, and Brad Paisley and Carrie Underwood host.

The Game (8pm, ABC) (10pm, BBC America, series premiere)
Not to be confused with the BET show of the same name, or of the rapper of the same name, or the book about demeaning women in order to have sex with them of the same name. This BBC miniseries is about spying and espionage during the 70’s. As much as I am looking for anything to fill The Americans shaped hole in my heart (The Honorable Woman did a good job at that this summer), I can’t help but think The Americans opened up the John le Carré-esqe niche of artistinal spying without technological contrivances, taking away scenes of some IT guy in a CSI or 24 enhancing or zooming in on footage, or someone demanding a suspect’s bank statement to be pulled. And as much as this genre is my total jam, I am waiting for a show in this style to bomb. Somewhere AMC’s Rubicon is is taking three episodes to scream into the void about being to early for its time.

Friday, November 7
Lance Armstrong: Stop at Nothing (9pm, Showtime)
Step one: Make documentary about how Lance Armstrong duped all of us and is a fraud and a cheat
Step two: ?
Step three: Profit!

Saturday, November 8
Doctor Who (9pm, BBC America, season finale)
The season premiere of Doctor Who has remained unwatched on my DVR for weeks now, just sitting there, politely asking me if I ever wanted to watch it while scrolling through my recorded episodes of You’re the Worst. I’m still burned from the final batch of Matt Smith episodes, and a permanent eye roll affixed to my face whenever Steven Moffat is mentioned in conversation. What actually happened is that a great season (according to my social media feeds) of Doctor Who has been turned in with Peter Capadli putting in great work as the new Doctor. Clever show, I just may have to revisit you.

Sunday, November 9
The Newsroom (9pm, HBO, season premiere)
Too bad this will be the final season of The Newsroom, so no-go on a storyline next season about layoffs at a certain prestige cable channel. The Newsroom is really just like E’s Total Divas, but for news events, and it is a vehicle to see how GET OFF MY CURRENS EVENT LAWN Aaron Sorkin can get with Jeff Daniels.

The Comeback (10pm, HBO, season premiere)
The first season of The Comeback aired in 2005 after Entourage. Nine years later, the retroactively cult classic Lisa Kudrow’s show business satire returns for a second season. Which one can say is the comeback of The Comeback.

Getting On (10:30pm, HBO, season premiere)
The second season of the British adaptation about medical bureaucracy premieres.